The Draculas Give Back to the ..

Every day after work I come home and get greeted by two excited dogs and every day we go for a walk around our neighborhood in Bluff heights. Like typical dogs, they like to smell everything, hear everything and see everything that’s going on around us as we make our way through the streets. While I’m looking at the bungalows and Spanish style houses, they are checking every other tree to see what other dogs have been in their neighborhood. But it’s not the other dogs in our neighborhood that seem to distract them (and me) on our walk…it’s the parrots. That’s right, oodles of parrots, jumping around in the trees and squawking like there’s a big parrot party happening above our heads.

That would be all well and good, but the dogs and I think the parrots are following us. That’s right, not just following, but taunting. They seem to jump from tree to tree following the exact same pathway as our neighborhood walk. Dogs usually lead with their noses, but when the parrots are around, I have two little pups that walk around looking up in the sky as parrots swoop through the street and seemingly verbally abuse us every day. So, out of concern for my dogs’ mental health, I decided to find out more about the resident parrots that live in our neighborhood and much of Long Beach. 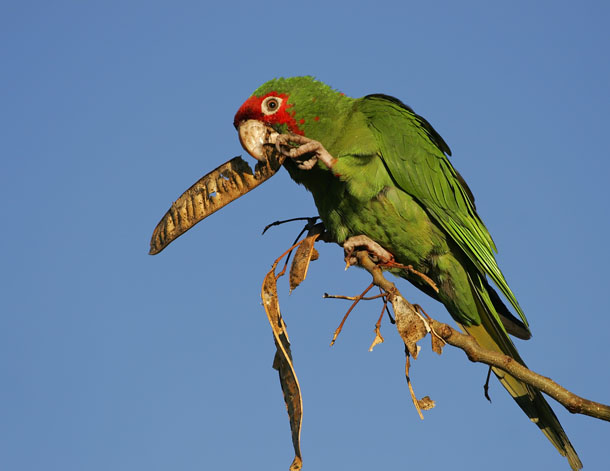 I didn’t have to look far, there is ample reading about the Long Beach Parrots on the interwebs (I’m over 50, so I can call it that). One of the most detailed and informative articles I found is Susette Horspool’s piece at pethelpful.com . Susette goes into detail about the history and different species of Long Beach and other Los Angeles area parrots. What is interesting to me is she references a lot of scientific research that has been conducted on the parrots of Southern California. Unfortunately, none of that research can tell me why the parrots are targeting my dogs and me on our walks, but I’ll share a few tidbits of what researchers have found anyway.

The California Parrot project says there are about 13 varieties of Naturalized Parrots in Southern California, ranging from the Rose-ringed Parakeets from Africa and India to the Red Lored Parrots from the Caribbean and Southern Mexico. Our Long Beach resident parrots seem to be Mitred Parakeet’s that are native to Peru, Bolivia and Argentina. They started being reported on in Long Beach as early as the 1980s and their population is growing. Luckily, as Horspool talks about in her article, the parrots don’t seem to be displacing native birds or having a major effect on native habitat. They seem to be doing just fine with all of the imported tropical plants and trees, which makes a lot of sense to me. 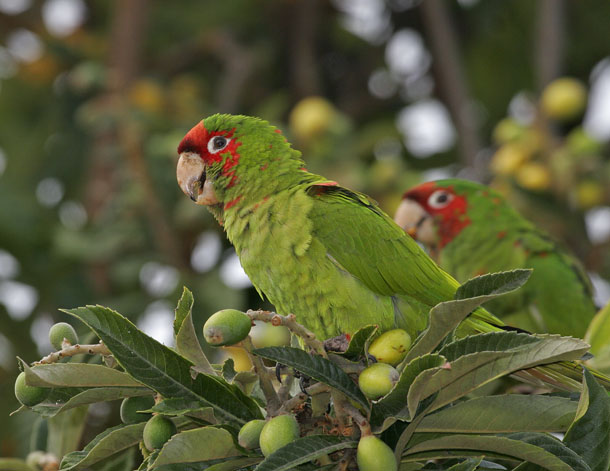 What I find most fascinating about the Long Beach/Southern California parrot story is the lore around how these bird populations got here in the first place. All of the theories, of course, revolve around the release of imported parrots. They include, parrots escaping a bird trader in the 1940s and ‘50s, a 1959 fire incident at Simpson’s Garden Town Nursery in Pasadena, and a 1979 Busch Garden move that saw several birds released. Most likely, there is not one incident that populated Southern California with parrots, but they have, nevertheless become part of our environment and culture, especially in Long Beach.

I have to admit I don’t actually feel targeted by the parrots and I think the dogs could care less, but they have become a part of our daily routine and they make me smile every time I hear a squawk and see a vivid green and red pandemonium of parrots descend on our neighborhood.

There is so much more to learn about our feathered friends. If you would like more information about the Long Beach Parrots search the intewebs or go to: