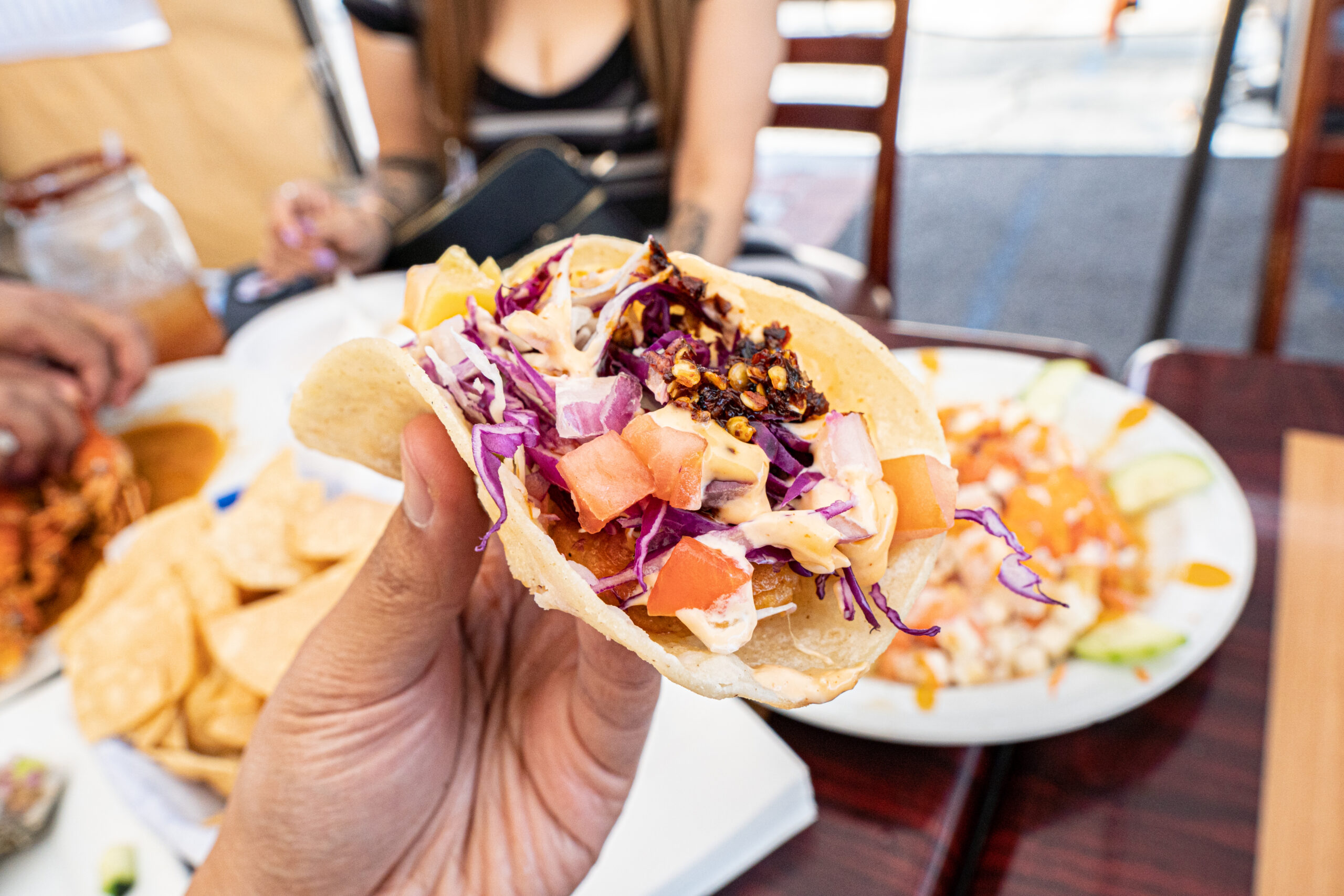 I’ve been living in North Long Beach for well over fifteen years and I always found the opportunity for good food to be severely lacking. There are a few gems such as Los Eduardos, Robert Earl’s BBQ, or Sal’s Gumbo Shack, but in general, the scene is in a fledgling state. Fortunately, El Rey del Sarandeado (formerly Cheko el Rey del Sarandeado) made its debut in 2015 and I quickly became a regular customer. They’re a blue-stucco-hole-in-the-wall off of Market Street that’s easily missed if you’re not actively looking for it. El Rey is a mariscos joint with dishes that are heavily inspired by food from the Nayarit region of Mexico. It was started by a North Long Beach local—Kenia Monrroy—who decided to open her own business after becoming close friends with Sergio Peñuelas, a former chef who worked at Coni’Seafood in Inglewood. Her vision in her late teens was to bring fresh, never frozen, seafood to the residents of North Long Beach, and with a little help from her parents, and the talent that Sergio brought to the table, she became the sole owner of a Mexican seafood restaurant. Yes, she’s a business owner in her early twenties!

Now, let’s talk about the food. What sold me on this place was just how fresh everything was. It’s all made to order from the ceviche to their whole snook grilled over hot coals. The experience always starts with house made tortilla chips and their green salsa that’ll set the unsuspecting on fire. I’m a novice when it comes to spice, however, this sauce works beautifully with the myriad of seafood treasures that can be ordered here. One of my go-to meals that pairs very well with the aforementioned salsa are the tacos. My favorite for the longest time were the tacos de marlin which are composed of smoked marlin, mozzarella cheese, avocado, and hand-crafted tortilla accompanied by a tomato salsa. The smoked marlin results in a bacon-y flavor profile which is mellowed out by the other elements involved creating a really balanced taco.

Despite the tacos de marlin rey-ning in my books for years, I recently discovered their tacos de camarones (shrimp tacos) which quickly dethroned it. These tacos were comprised of lightly fried shrimp, shredded cabbage, diced tomato, diced mango, chili oil, and some sort of tangy aioli. These are lowkey my favorite shrimp tacos of all time. It’s a flavor explosion with the shrimp adding a slight crispy and juicy bite that is enveloped by the subtle warmth of the chili oil, and is then followed up by the sweetness of the mango and aioli. It’s not on the menu so make sure you ask for the tacos de camarones!

After that are the ceviche, of which are all delicious. I’m a particular fan of the Ceviche Rey which has shrimp, fish, octopus, jicama, tomato, and onion that has been quick-cured in lime juice and drizzled with a habanero-mango sauce. It’s an acidic punch that still has the natural sweetness of the seafood coming through each bite. It’s also a textural treat with the tender marine ingredients contrasting with the fresh crunch from the jicama.

Additionally, you could get the chicharonnes de pescado, a local’s favorite. These make for a great sharing plate and consist of chunks of tilapia filets that have been deep-fried to a crisp and drenched in a “black sauce” which I think is soy and citrus based. Whatever it is, it contributes a bright zest that keeps you going back for more.

Next on the list are the langostinos. This is also another must-try item, they’re langoustines that have been cooked in their house sauce. If you haven’t had langoustines, you’re missing out. They look nearly identical to prawns, however, the flesh tastes more akin to lobster than shrimp. It’s sweet and buttery and sings when it’s dipped into the thick, rich, and savory house sauce. Pro-tip: also dip your tacos into this sauce to level up the entire affair.

Lastly, is the dessert! I really adore their flan, I got the Nutella variant and wow it’s fantastic. I’m not too keen on things that are too sweet and upon my first bite, I did get hit with a saccharine sweetness from the caramel sauce that drapes over the whole mound. Once that dissipated though, I was left with the custardy flan that had a delicate chocolate-hazelnut aroma that was creamy but just sweet enough that I ended up eating the entire thing.

I’ve only touched the surface of everything they have to offer, even so, it’s safe to say that they are the king of mariscos. At least in North LB. So if you’re ever craving some amazingly fresh seafood with a unique Mexican twist, swing on by and say hello.