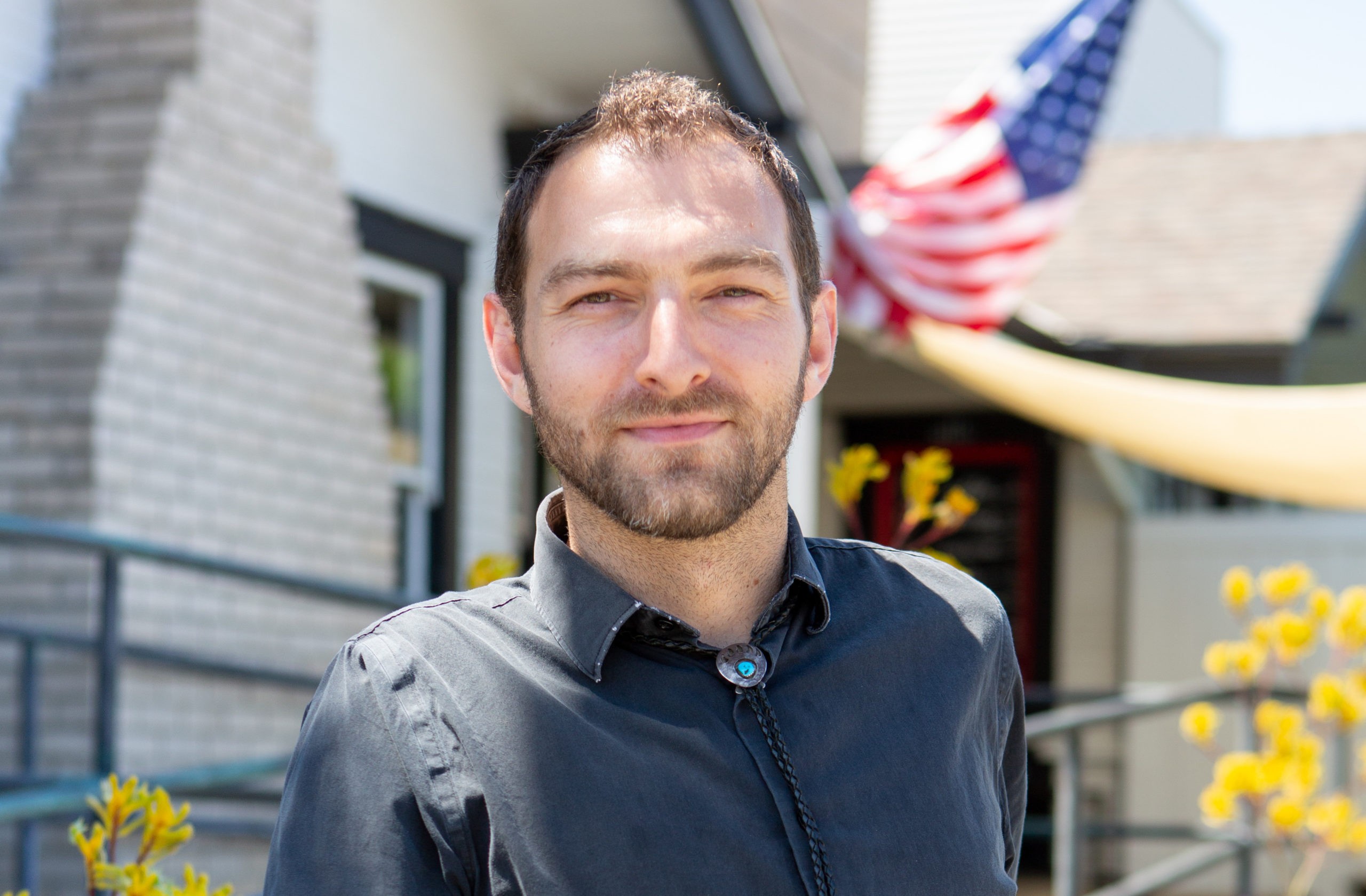 George Glikman is a natural to the world of restaurant servers, as he shared, “Growing up we always had lots of family feasts in our small, two-bedroom place, with both my parents cooking and family and friends filling our house. It was cramped but lots of fun.” George eventually made his way south to Long Beach by way of Berkeley where the food culture was well established. “Chez Panisse was right down the street from the little bar and grill where I got my start. Eating out didn’t have to be a formal event but it was clearly an evolved experience in the Bay area.”

Upon arriving in Long Beach, George used his experience to jump in at No. 9 Noodle Company, Open Sesame and The Attic as a server. At one point he was working all three places. “That was a hectic period,” he said. Eventually he took on the role of manager at The Attic, where he invested all his time and talent. But managing wasn’t his strength, he learned after 18 months, so he returned to serving. “I like the restaurant business, I like interacting with people and making them feel welcome, as if they’re visiting my home.” Anyone who has dined at The Attic knows, that is definitely the vibe there, partly due to the fact it’s in a cozy craftsman bungalow but also because the cuisine is a local spin on Southern comfort food, yet with a bit of gourmet flair.

“Long Beach is this big town with a small town feel, and so much publicity is generated by word of mouth, literally overnight. People and restaurants alike are sharing about the local food culture. I think when a few places start featuring elevated menus, it forces other restaurants to rise to the same level, and in the eight years I’ve been here, a lot has changed in terms of quality of food. It has definitely improved.”

While at the Attic, George has seen the place become a destination restaurant with thousands of Yelp reviews, part of which he feels was prompted by a BuzzFeed article on their Mac N Cheetos in 2016, “although that is not necessarily what keeps people coming back,” he added. George also took on the role of charitable event planner, coordinating the annual Golf Tournament that would benefit Long Beach Rescue Mission. He enjoyed the combination of giving back while collaborating with other establishments to create a sense of community, so much so that after educating himself on the philanthropic work being done in town, he formed his own charitable giving effort, Righteous Function.

Health and Wellness: Take steps to build a better you

“After putting on the golf tournament, I saw how it not only generated support for charity but brought together business and media and raised awareness for all involved,” Glikman said. Righteous Function’s inaugural event was a fundraiser at Ten Mile Brewing where collaborative partners Shady Grove Foods and Long Beach Jerky Company also contributed to raise money for Long Beach Rescue Mission. Since then, he’s organized numerous events and plans to have several repeat events annually, all benefitting several different charitable partners. So far it has helped give back to Food Finders, Food 4 Kids, Long Beach Rescue Mission, CSULB, and soon U.S. Vets. There were also a few more personal events in response to immediate needs, including one at Ashley’s bar to benefit Restauration after the fire shut them down last year. Last December, Glikman and his then partner held a wine tasting at District Wine. “I think the wine tasting event was great, that will definitely happen again,” he said.

Currently he runs Righteous Function solo but collaborates with like-minded businesses and is formulating plans to collect needed items, like clothes or shoes or food, in addition to raising cash. “Whatever is needed, I think it’s important to provide value all the way around.”

George continues to spend time outside his serving job volunteering and was also instrumental in having The Attic donate food overages to Food Finders as part of its food recovery program. But with all of these activities on his plate, does he ever have time to cook at home? “Yeah, I love my gas range. Not so much the oven, but sauté rules!” Glikman shared.