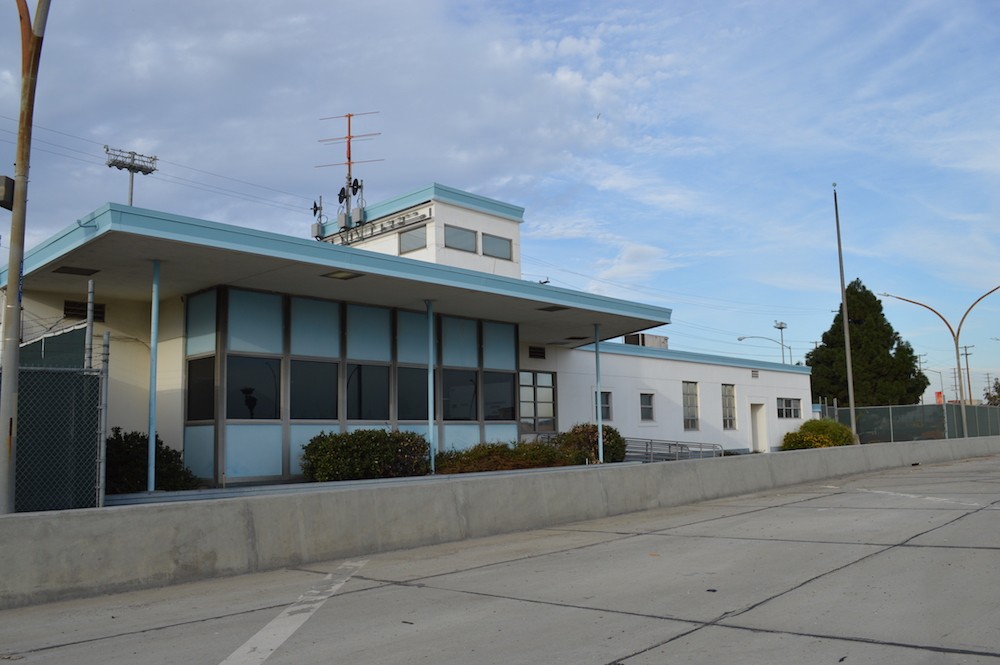 The next time you travel west along the Gerald Desmond Bridge, you might notice a subtly Modernist building near Navy Way, which almost blends into its highway. The building remains from the former Roosevelt Naval Base, an impressive campus designed by the “Allied Engineers” and constructed in 1943. Architecture firms led by Paul Revere Williams, Adrian Wilson, and Donald R. Warren completed the design of the buildings. Built in the International Style, the base secured Long Beach’s identity as a Navy town.

The base served Long Beach and the nation well for over 50 years, but was closed along with 34 others nationally in 1993 following the end of the Cold War. After evaluating bids for the location, the City of Long Beach granted jurisdiction over the base and the neighboring Naval Shipyard to the Port of Long Beach in 1995. Immediately after, the Port of Long Beach entered into an agreement with the Chinese government to allow their commercial shipping corporation, COSCO, to build a large-scale terminal on the site. Their plan required demolition of Roosevelt Naval Base.

The base was demolished, to the dismay of the preservation community in Long Beach, in 1998. As an example of early Modernism in Southern California, its loss was a great one for Long Beach preservation. When demolished, residents came together to mourn the base and its role in Long Beach’s community. What those residents did not know, however, is that a building near Navy Way quietly escaped the wrecking ball.

If you’re wondering, “how?,” the answer is, “obscurity.” The building, having formerly been owned by the military, sits on unincorporated territory, which has no parcel number, on the boundaries of the cities of Los Angeles and Long Beach. Since no jurisdiction has ownership over the building’s land, no agency has laid claim to it.

The original use of the building is unknown, though based upon its location and similarity to guard stations documented within the former base, it likely served a security-related purpose. What is known is that the building was given to Caltrans in the late 1960s for use as an office when the Vincent Thomas Bridge was converted to a toll bridge. It was then that the building was officially decommissioned by the military. In the hands of Caltrans, the building has served a useful life. Though the bridge ceased to require tolls in 2000, Caltrans operates in the area for other maintenance and infrastructure work. As the building is near the intersection of both bridges and has parking for staff, it continues to be used for storage, occasional workspace, and a break area for Caltrans workers.

When Roosevelt Naval Base was demolished in 1998 and its buildings were catalogued and documented, this building was omitted as it was no longer part of the base. It is unknown whether anyone involved in the documentation at the time realized that it had previously been so. Because the building has no address, parcel number, or jurisdiction, its preservation is difficult. It is undeniably eligible for historic designation, but any level of protection would likely have to be attained at the national level and would require consent from Caltrans.

If such protection were pursued, it is clear that the building retains sufficient integrity to be eligible for historic designation. The simplicity of the building leaves few decorative elements to be lost, and in this instance has made it easier for the building to remain intact. In sharing this research and findings, it is hoped that the existence of this building can help to ease the loss of such a substantial historic resource and cultural anchor to Southern California. As one of just a few buildings in the Long Beach area that recall the great Navy presence that once existed in the community, the building holds great potential for education and interpretation.