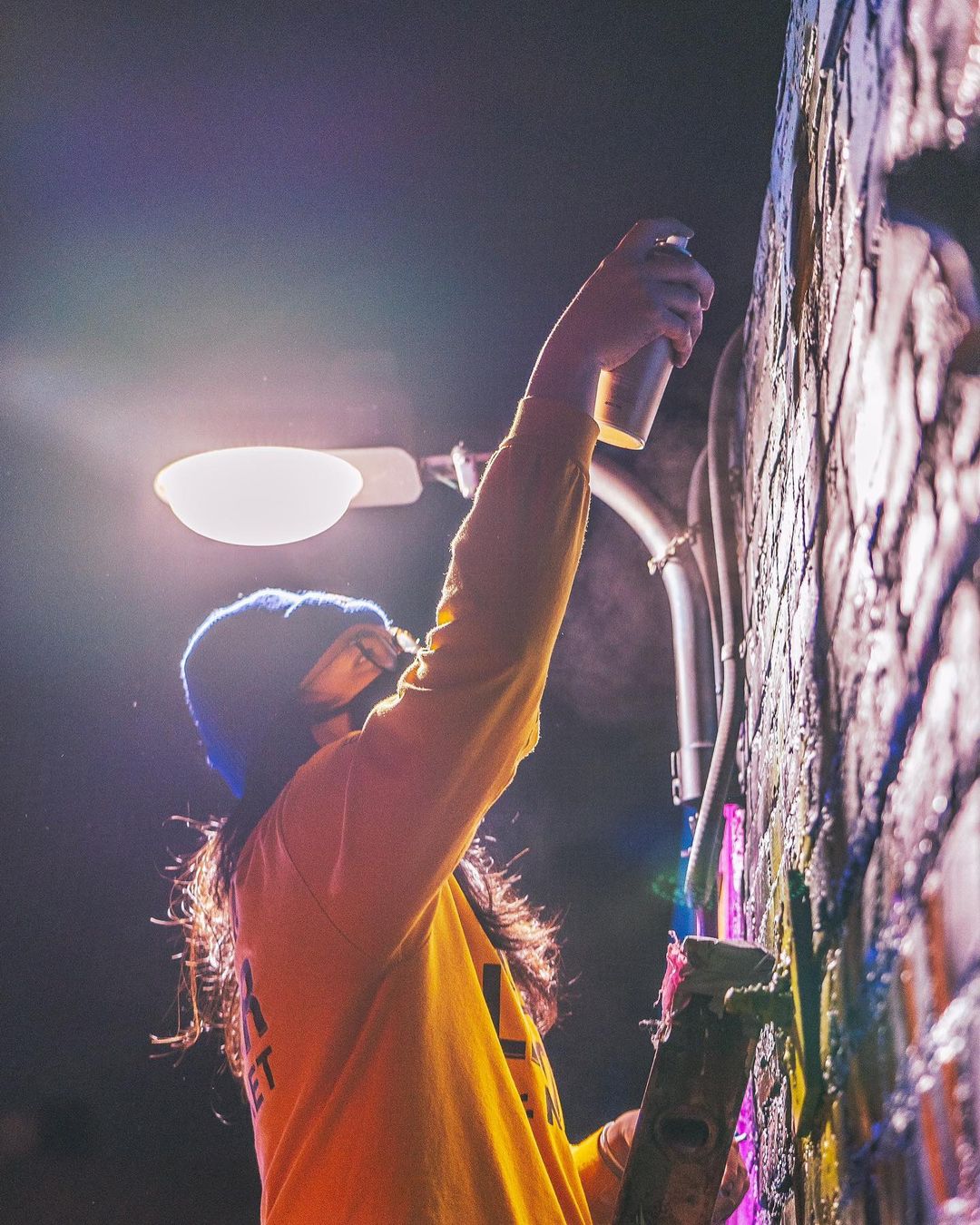 One of the things that stands out about artist Bodeck Luna’s work is the vibrancy of his pallet. Bright yellows and electric blues pulse through his murals giving life to the sharp, static images themselves. There is an almost cinematic quality about it all, his use of texture trains your eye through the painting like a story. Luna’s work is inherently pleasant to look at, which is what makes pieces like “Solidarity” so impactful. The mural is in his signature bright coloring with two hands engaged in a handshake, but after first glance you see the knife that pierces both hands, pinning the two together through their pain. Most recently Luna teamed up with A Cause Worth Wearing in collaboration with Long Beach Gives, Arts Council for Long Beach, and LB Living and designed a shirt to benefit The Long Beach Immigrants Rights Coalition.

Creating has always been in his life, even before he realized it was going to be a lifelong passion. “I’ve been creating since I was a child. I started drawing scenes in coloring books once I ran out of figures to color.” It didn’t take long for him to realize art and creation could mean more than just being beautiful. “A 4th grade field trip to the National Museum in the Philippines introduced me to the piece Spolarium by Juan Luna – learned its significance and never looked at art the same way. Fast forward – I ultimately dropped out of college to pursue art and immersively self-educated moving forward.”

Luna’s design for the t-shirt is one that stands out, in his signature style with bold lines and bright colors. The words ‘Know Your Roots’ at the center of it all. For Luna, this isn’t something that should seem like a radical idea. “We’re surrounded by branding and logos, I just wanted a piece that sparks healing for people getting in touch with their ancestors’ history to address intergenerational trauma. More than half of the world’s nations do not speak their native tongue which is an astounding idea every time I’m reminded of this thought. We are so used to being so statically detached from the concept that history only lives in academia when we’re also constantly interacting with the byproducts of it while writing history itself through our actions. We can’t fully live in the present without addressing our roots which should help us get grounded in defining who we are today as individual contributors in a collective society.” The cause he chose also felt natural considering Luna’s own story. “As an immigrant artist and community organizer, I firmly believe that they (Long Beach Immigrants Right Coalition) are providing resources that serve underrepresented peoples when nobody would.”

This design and partnership are not out of character for Luna. He has been actively engaged in community activism and thinks it’s an important part of any city. “You can tell how healthy a city is based on the local organizations that represent them. It’s imperative that we identify the needs of our residents and collectively come up with a solution through the community’s efforts and resources.”

With recent rises in violence against Asian-American’s and important movements like Black Lives Matter, now more than ever it is imperative to define the side of history you intend to sit on. Another piece of Bodeck Luna’s I walked by often was on the boarded-up windows of Romeo’s Chocolates, a Filipino owned chocolate shop in downtown Long Beach. It was in stark contrast to his other work, a black background with a fist emerging from a succulent style plant in all white. Next to the mural were the simple words: “FILIPINX FOR BLACK LIVES: EDUCATE, ORGANIZE, MOBILIZE”

After speaking with Luna it became clear this design really is at the heart of what he wants to portray with his art. Knowing yourself and where you come from can only make you better connected to those around you. Luna himself said it best, “The biggest plug that would mean the world for me is for folx to join a community organization today or at least start getting involved in their neighborhoods.” And most importantly remember: “We’re all we got!”

You can keep an eye on Bodeck Luna’s work on Facebook and Instagram @BodeckLuna or on his website BodeckLuna.com. If you like his design there are more in the works with another organization. “I’m in the middle of designing a print drop and I’m also doing a shirt collab with @westpremiums dropping in October this year for Filipino Heritage month giving homage to Larry Itliong.” You can find Luna’s exclusive design for A Cause Worth Wearing in the Marketplace by LB Living.