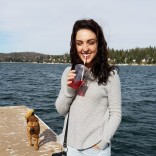 Brigid McLaughlin is a writer, educator, and cat-mom. Born, raised,…

See Rebekah Waites’ large scale, mixed media work. At LA Decom Waites is featuring 3 sculptures inspired by the “Relevé” that will be revealed this week in Long Beach.

Based out of the Los Angeles Area, Waites has been working with Burning Man since 2013. She’s a three time honorary recipient whom you may recognize from previous works like Singularity and Church Trap.

“I’m very much excited to be a part of LA Decom” says Waites, she’s exhibited with LA Decom in the past and is excited to share her work at the event in Long Beach this year.

Recently Waites built and exhibited one of her pieces, Relevé, during Radical Horizons. This was the Art of Burning Man exhibit at Chatsworth House that happened during the summer of 2022 near Manchester, UK.

Relevé was inspired by the 9 Ladies Stone Circle, believed to be from the bronze age, the circle of stones represents where 9 ladies were turned to stone for dancing one Sunday. Waites uses imagery of Releve to depict the 9 ladies being set free. Waites said, “I shine the lot on topics that can be somewhat uncomfortable.” Her work merges big ideas with big art as she incorporates topics such as religious cultism, women’s rights, and depression.

Burning Man typcially features deep house, EDM, and techno beats at it’s festival grounds, and LA Decom is no different. Throughout the day enjoy upbeat music that the whole family can enjoy. The  21+ after party event will be hosted by Long Beach’s very own Secret Service music collective.

“We’re looking forward to being able to connect with people in the community that I’ve known and see some new faces,” said Sal Lopez of Secret Service. “We have some new music, new production, and sound systems.” This is the first show where they’ll unveil new technology to share with the community.

The Secret Service After Party will feature four sets with different artists including the duo Freaky Deaky – Gypci and Salvad3r, Collin James, and Kharachi.

Find much more amazing art pieces and live music at LA Decom in Long Beach this week, on Saturday Oct. 22! 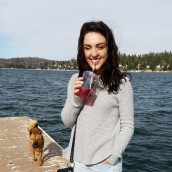 Brigid McLaughlin is a writer, educator, and cat-mom. Born, raised, and educated in Long Beach, she has a bachelor's degree in Journalism from CSULB and enjoys writing stories about arts, culture, and human rights.