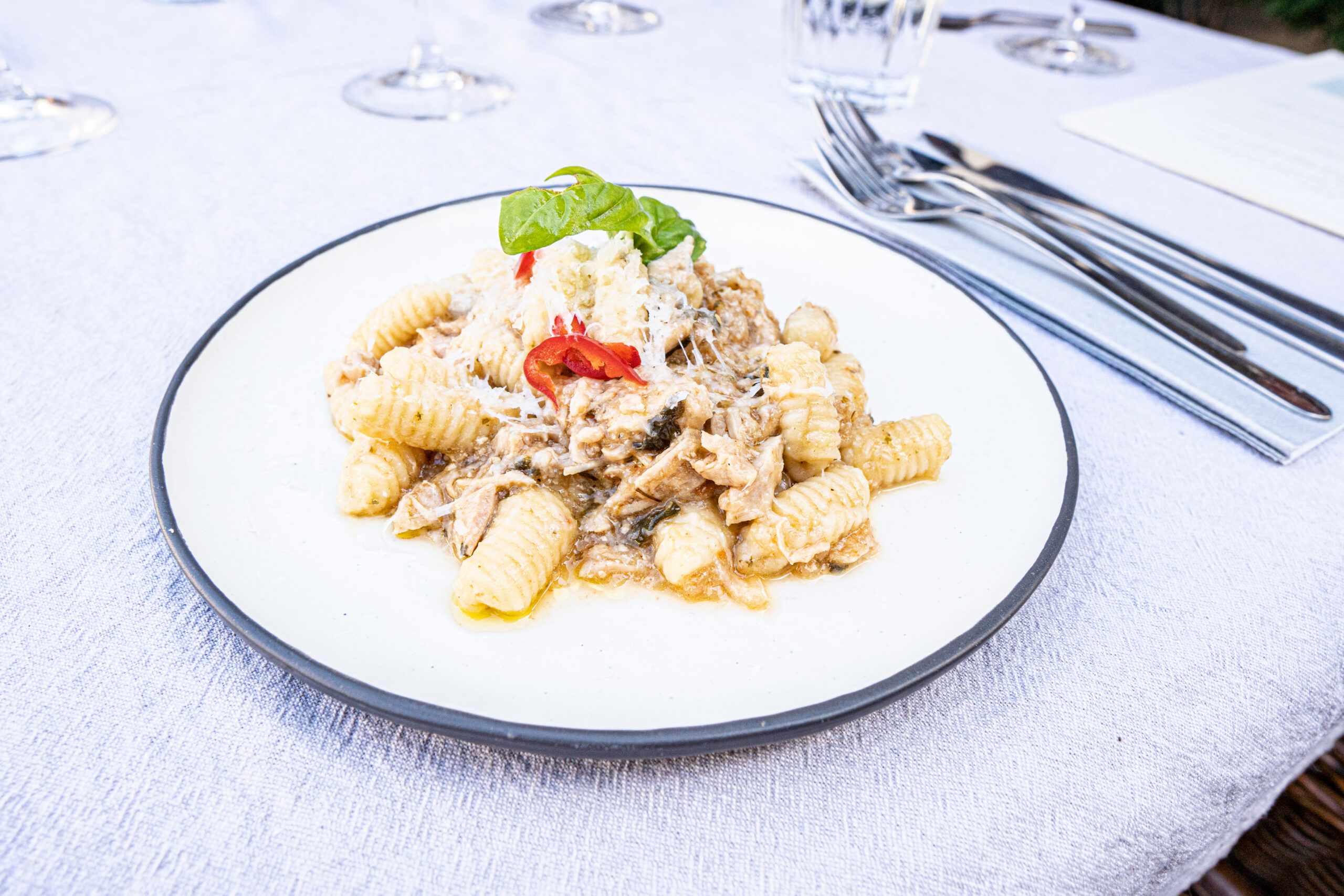 I was chilling out at a backyard dinner in Bluff Park several weeks ago. This was where I first met Chef Christian Simionato. I had arrived to the small gathering early, so I got to see the Chef’s mise en place—he had everything prepared for a four course meal—including dough, vegetables, meat, and more. He was quite animated while working on the prep, as he had to run up and down a set of stairs to a kitchen located on the second level. Between breaths, he’d give us snippets of his inspiration for cooking while putting the beginning and finishing touches on each course at the same time. 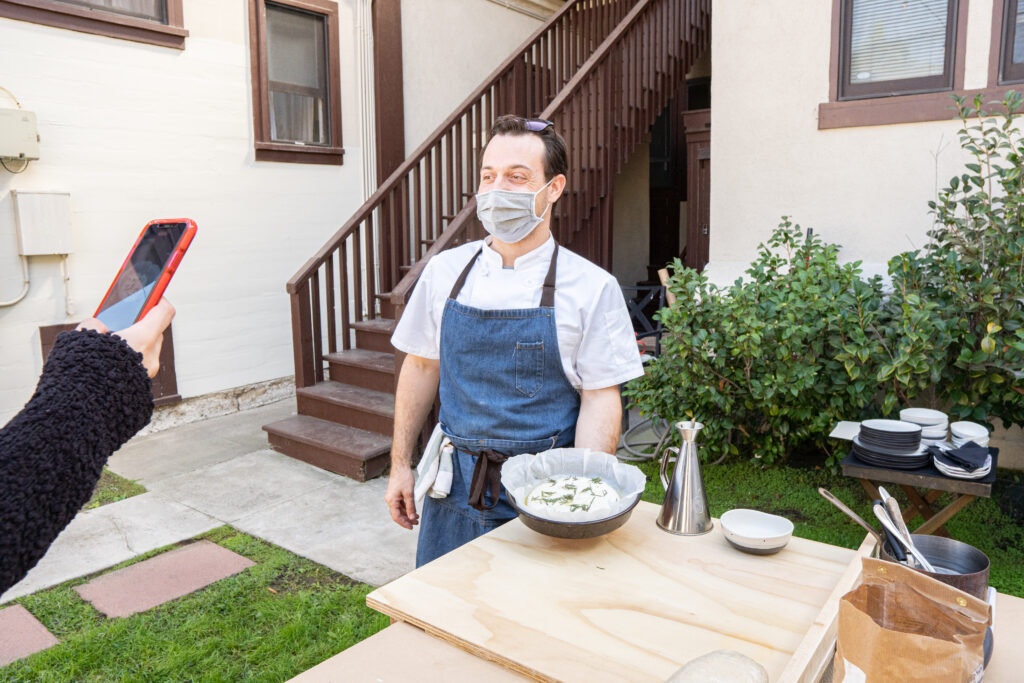 Christian has been a resident of Long Beach for over five years and loves living in the city. “Thanks to the life and spirit of the city, it makes me feel like I’m home,” he said. His home town is Villanova di Camposampiero which is about twenty miles west of Venice, Italy. It’s a small village where he learned to respect the ingredients he worked with as he had to garden and raise livestock for food. He started cooking in the kitchen at the age of fourteen endeavoring to become a chef. He eventually attended culinary school in Italy and earned a degree in enogastronomy. From there, he worked with several Michelin-starred chefs (such as Marco Sacco and Francesco Mazzei) starting in Italy, then to London and Beijing. After that, he traveled stateside to work as a sous-chef in Newport’s Pelican Resort, a chef in WeHo’s Al Bacio, and finally settling in Signal Hill. From there, he encountered Debora of DG Events at a Long Beach wine bar and together, they organize cooking classes and pop up dinners all over Long Beach.

As a private chef, he makes everything from scratch using quality ingredients. In example, he uses a fourteen year old starter in his dough. He made it a point that his dough loves Long Beach water, which is his secret for why it doubles in size within a few hours. At the backyard dinner, he had some of it already prepped to make focaccia for the antipasto portion of the dinner. He placed the dough onto a presentation surface and massaged the dough, drizzled it with olive oil, and then ran back up the stairs to stick it into the oven. When it came back out, it was thick, steamy, and had the aroma of rosemary. It was really tasty, the dough itself was pillowy with a nutty depth of flavor. That was part of the antipasto, which included a vegetable crudité. What followed those were the four main courses and dessert. 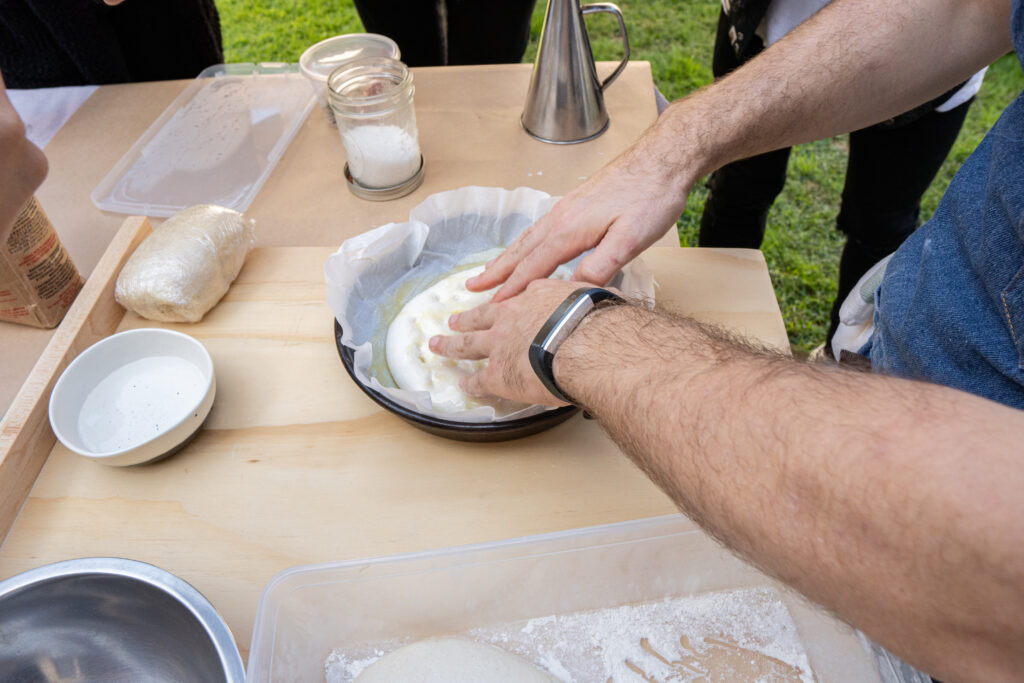 For the first course (Primo I), we got risotto with roasted zucchini, pheasant ragu sauce, intingolo fresh oregano, balsamic vinegar, and extra virgin olive oil. The risotto was creamy and buttery while the pheasant ragu provided a umami-tang that brought the entire package together. 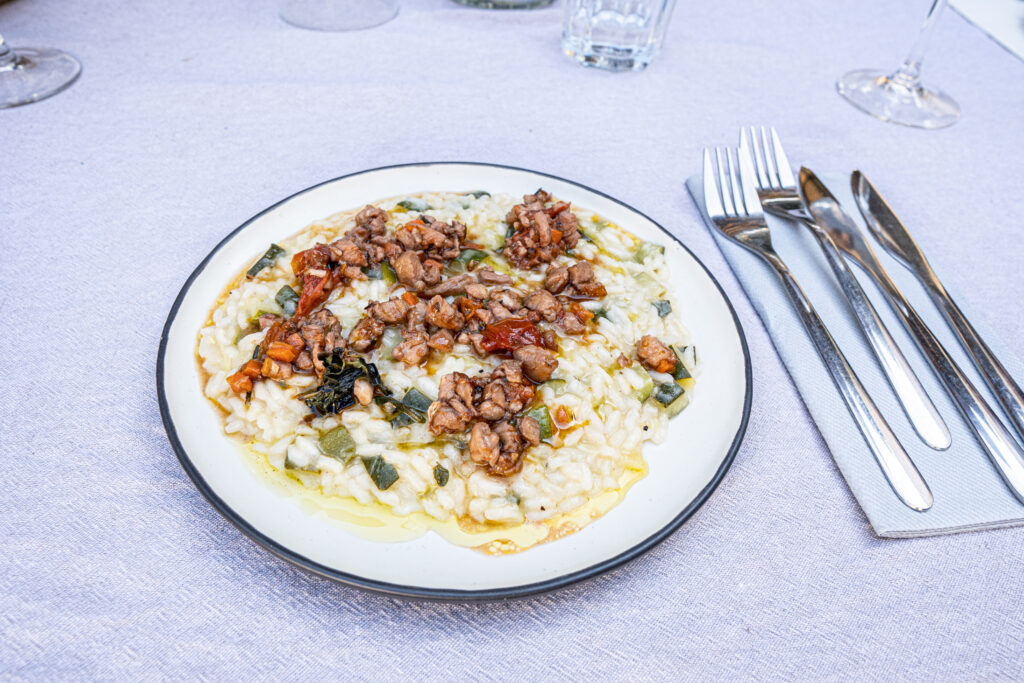 The second course (Primo II) was the handmade cavatelli pasta with a seven-hour braised pork ragu known as “ragu alla Genovese” which is topped with pecorino shavings. The handmade cavatelli had an incredible bite and carried the ragu very well. It was meaty, herbaceous, and unctuous. 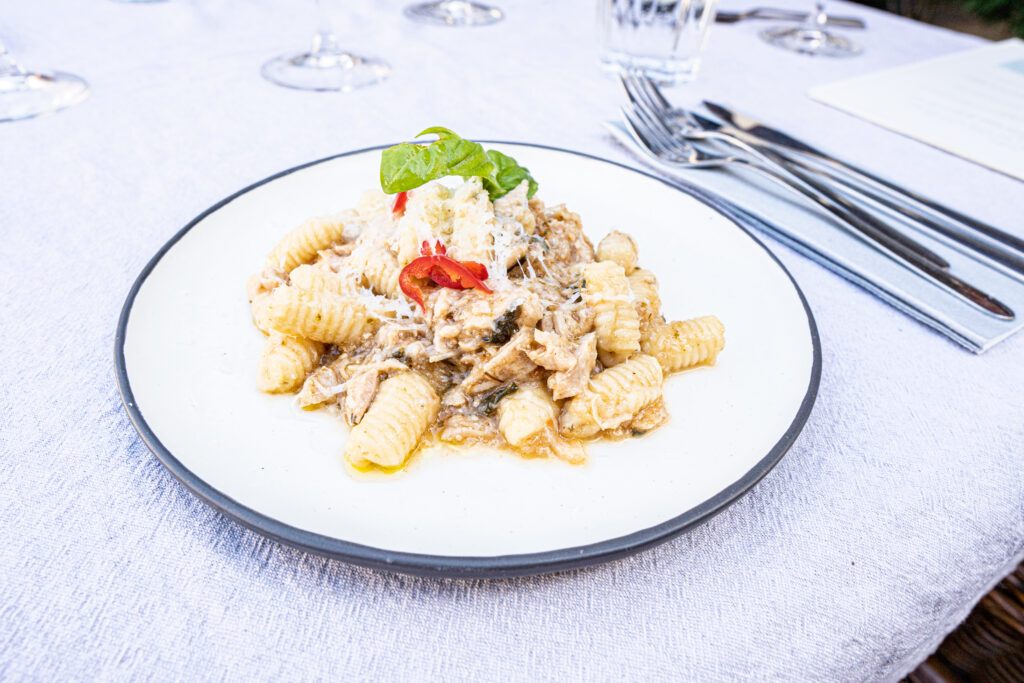 The third course (Secondo I) was a roasted red snapper with a zucchini crust, bread crumbs with herbs, Chinese cauliflower purée, and strawberry agretto. The snapper was delicate which contrasted nicely with the textural crunch of the crumbs. The purée contributed a velvety richness while the strawberry brought in a pop of brightness. 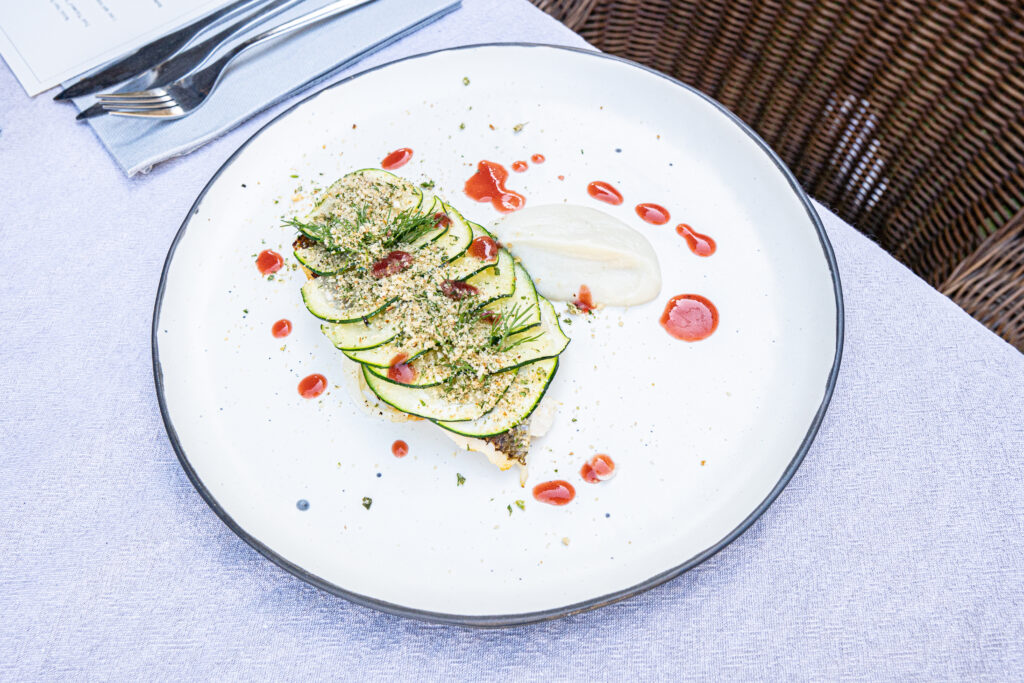 The fourth course (Secondo II) was the hen rollatine. It’s comprised of a thin chicken cutlet that has been rolled up with sage, carrots, spinach, and brie cheese in the center, and paired with grilled shiitake, roasted heirloom carrots, hen & prosecco demi-glace, and parsley “Bagnetto alla Piemontese.” The final result was tender, moist, and savory. There’s a sweetness that is imparted by the carrots as well as a subtle earthiness from the shiitake—while the demi-glace and bagnetto balances each other out keeping the dish from being too heavy. 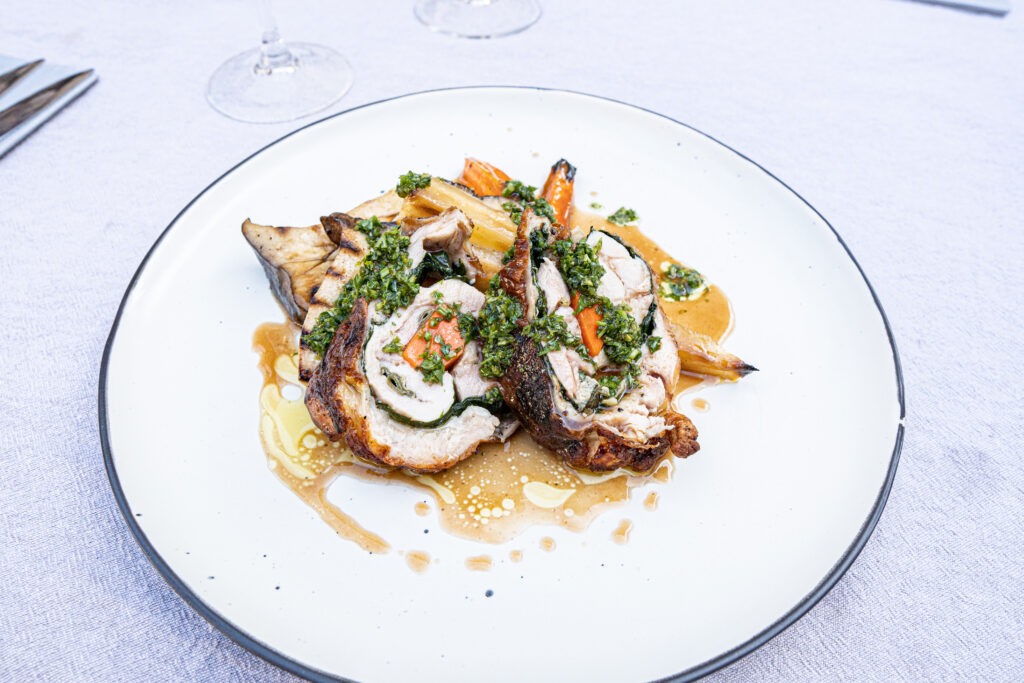 Lastly, was the dessert, which included a fresh fruit tart that was comprised of vanilla shortbread, almond biscuit, lemon custard cream, and fresh seasonal fruit. This was accompanied by a handmade crema gelato. 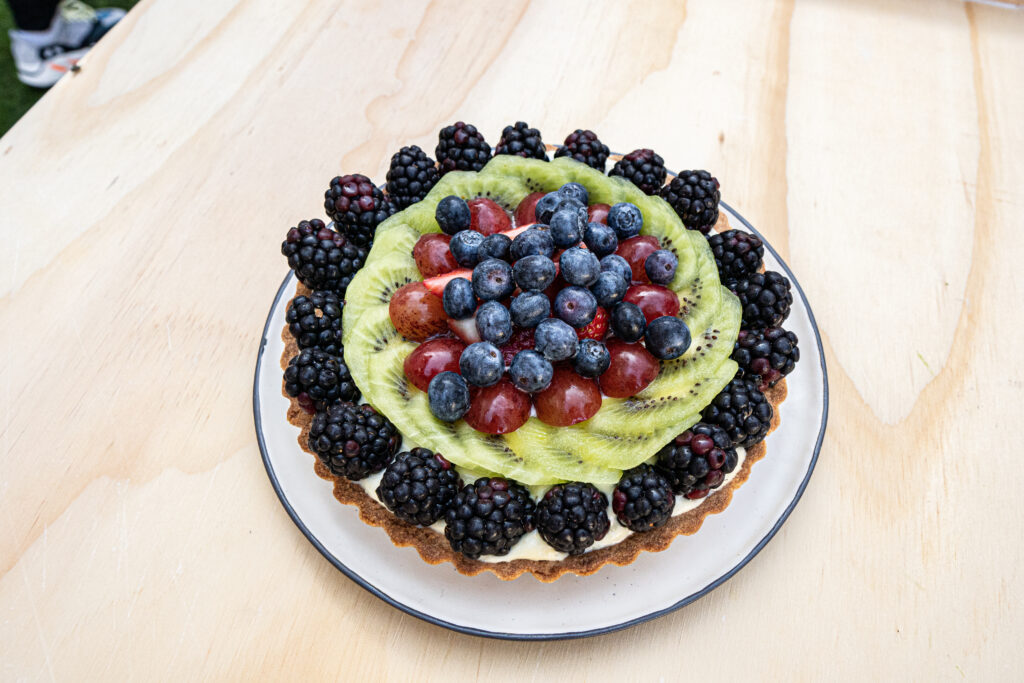 What’s neat about this entire dinner was the each course also came with a recommended wine to pair with which elevated the entire experience.

All-in-all, a private dinner with Chef Simionato was the perfect set up. He shows up to your home, has everything prepared, and throws it all together right in front of you while regaling you of tales from his travels, as well as his obsession with Long Beach. “I fell in love with the city, it felt very European. People say hello when you walk around and everyone is courteous. Probably the best city I’ve lived.”