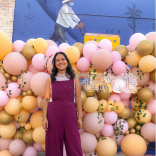 Día de Muertos is an ancient tradition that has been around for thousands of years. It’s not a morbid or spooky time. It’s not the “Mexican version of Halloween” nor with any ties to Halloween at all. In fact, Día de Muertos has roots that tie back to the Indigenous people of current day Mexico. Whereas Halloween has Celtic roots.

Día de Muertos is a time where grief and joy coexist. It’s a mark of the ending of one cycle and, within an ancestral worldview, the beginning of another. My hope as a first-generation Mexican-American, is that we start bringing back the conversation around Día de Muertos to its deep cultural and familial roots and not what it’s been commercialized to be. And those with no cultural ties to this tradition, that they learn how to culturally appreciate and honor this tradition without culturally appropriating it.

“It goes back some 3,000 years to the rituals honoring the dead in pre-Columbian Mesoamerica. The Aztecs, [Toltecs, Mayans,] and other Nahua people living in what is now central Mexico held a cyclical view of the universe, and saw death as [a natural], integral, ever-present part of life”, History Channel. What was originally celebrated largely in more rural, indigenous areas of current day Mexico, has now developed to where it is now widely considered as an integral part of the Mexican identity. With roots dating back thousands of years, long before Spanish settlers arrived.

“In particular, the Nahua people of central Mexico believed the deceased traveled on a years-long journey to Chicunamictlán, the Land of the Dead. The living would provide supplies, such food and water, to aid them on the trek. This practice inspired the modern tradition of creating altars—known as ofrendas—at their homes, in addition to leaving offerings at the gravesites of loved ones.” McKenzie Jean-Philippe of Oprah Daily.

Although the tradition has developed over the years, the essence of the tradition – as originally practiced by the Indigenous communities – remains the same. With the primary mission being to honor, remember, and celebrate the life of those who have come before us – while giving hope to our own inevitable mortality. It commemorates the brief return to Earth of deceased relatives and loved ones. It also goes in tandem with marking the completion of the annual cycle of cultivation of maize, Mexico’s predominant food crop.

Today, you’ll find in the mercaditos, puestos (stalls) selling decorated calaveras and restaurants with sheets of tissue paper cut into delicate shapes adorning their spaces. In casitas all around Mexico and Latin America, you’ll find altares with photographs of ancestors and loved ones filled with pan de muerto and Cempasúchiles (marigolds).

Here in Long Beach, there are many events that our Latine community is hosting that give an opportunity to learn and experience this centuries old tradition. Adelita’s Revenge will be hosting a Dia de Muertos event this Saturday, Oct. 22nd featuring pop-up vendors, a face painter, and community ofrendas. MoLAA (Museum of Latin American Art) is celebrating on Sunday, October 30th with a “Day of the Dead: Strength and Hope”. On Tuesday, November 1st, the Billie Jean King Main Library is hosting a Dia de Muertos celebration. And it all culminates to our very own City of Long Beach hosting the Grand Parade Dia de los Muertos followed by their Arte y Ofrendas Festival on Saturday, Nov. 5th. An all-day event with amazing costumes, rich history, and fun activities. LB Living will be making a special appearance too!

So before you apply the face paint or set up the altars – take a moment to educate yourself on the historical and cultural significance of La Catrina and los altares. Make sure to uplift celebration when honoring Día de Muertos as it is an integral part of it – grief and joy coexisting.