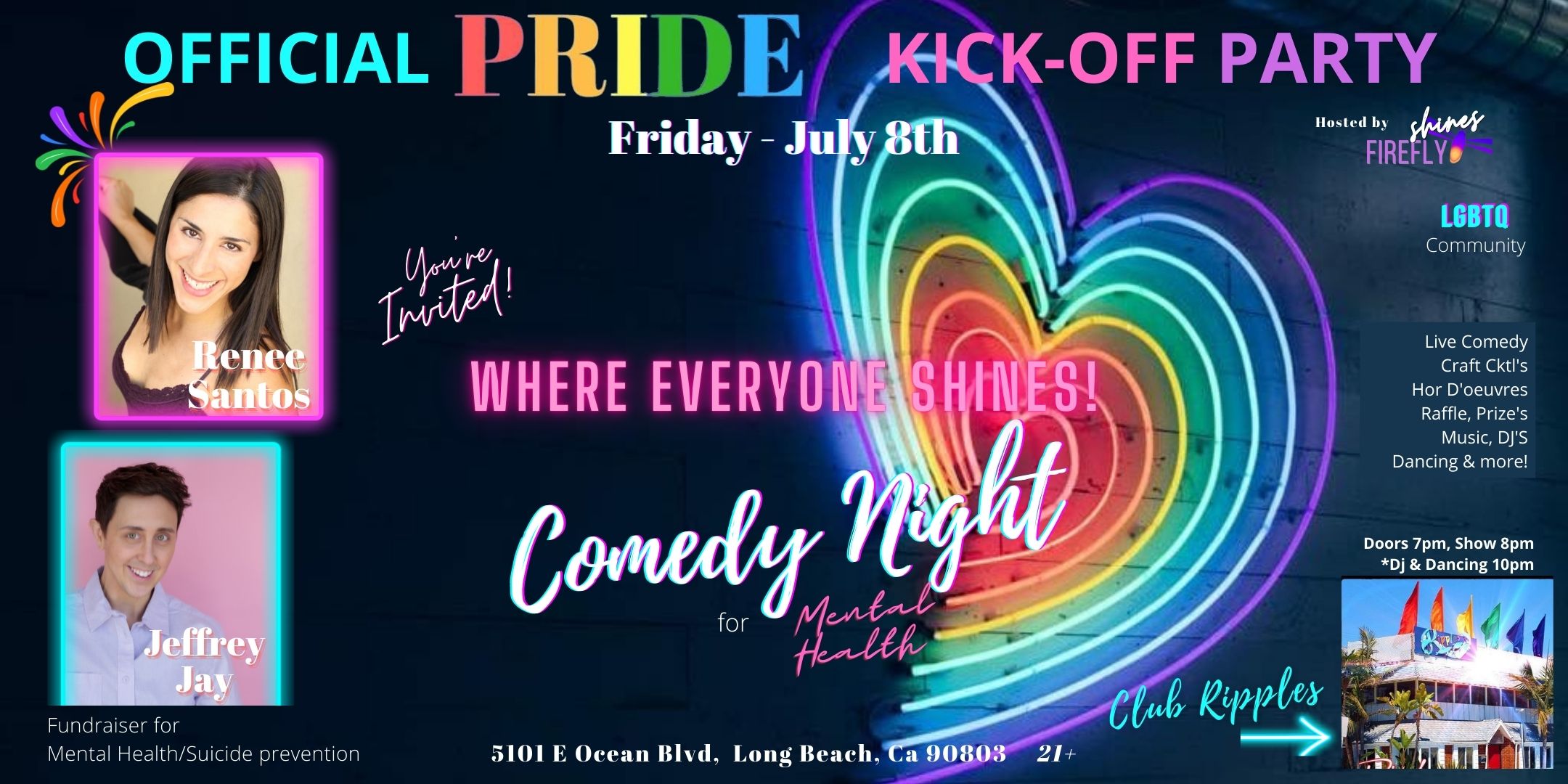 Please join us at our all-inclusive, “Where everyone shines” comedy night Friday, July 8th to kick-off Long Beach Pride weekend. Introducing a shake, shimmer and shine tribute to the

Please join us at our all-inclusive, “Where everyone shines” comedy night Friday, July 8th to kick-off Long Beach Pride weekend. Introducing a shake, shimmer and shine tribute to the original OG’s of pride. Featuring “best of pride comedy” live performances by RENEE SANTOS and JEFFREY JAY. Friday – July 8th-doors open 7pm show starts 8pm.
FEATURING LIVE “BEST OF PRIDE COMEDIANS” RENEE SANTOS and JEFFREY JAY
SANTOS burst onto the Stand Up comedy scene 8 years ago in her first National Television debut on Showtime Network’s “Pride Comedy Jam”. The Network touts, “a hip and hilarious show with a great ensemble of up and coming diverse comics, including the witty anecdotes of Latina Lesbian comic Renee Santos.” She has been a regular on the Los Angeles comedy scene performing consistently at local clubs, including the Comedy Store, The Laugh Factory, and the Hollywood Improv. She booked a starring role in the show “Stand-up and Deliver” featured on Jennifer Lopez’s new network NuvoTV Tuesday nights. In the fall of 2018, Record Label UPROAR Entertainment, the label responsible for launching the careers of greats Margaret Cho and Richard Pryor. In 2018 her first 1 Hour Comedy Album “Outside the Box” hit iTunes, Amazon, and anywhere you can buy Comedy or Music. In 2019 her Stand-Up Comedy Special “Outside the Box” was picked up by AmazonPRIME.
JAY is the premier transgender comedian and public speaker. He has been seen on the CW, Hulu, nominated for NACA’s Best Diversity Act, has been featured in The Advocate as one of “7 LGBT Comics You Shouldn’t Have Missed, a three time headliner for the Portland Queer Comedy Festival (the world’s largest LGBT comedy festival), a finalist in The Funniest Comic in Texas, and featured at the Bridgetown Comedy Festival.
Hosted by Firefly Shines. Where pride began CLUB RIPPLES pride kick-off comedy night for mental health fundraiser dedicated to suicide prevention. Proceeds benefit STAY, Suicide Talk and You Inc. and Trevor Project in honor of Pride month.
Venue is located at 5101 E Ocean Blvd, Long Beach, CA 90803.
Tickets available on EVENTBRITE $69 each, At Door $79 each.
COMEDY NIGHT – WHAT YOU GET: Entrance to PRIDE LAUNCH PARTY Friday, July 8th. Includes live comedy show, laughing, Hor D’oeuvres, commemorative souvenir and best costume prizes. Make it a tribute to the original OG’s (OG is slang term for someone who’s incredibly exceptional, authentic, or “old-school” ) of pride to win even more cool stuff. DJ disco grooves, dancing, rainbow drink specials, GOGO dancers and more.
Reserved Table w/Bottle Service available upon request. Limited to availability. Email jt@fireflyshines.com for more information.

Information about:
S.T.A.Y. – Suicide Talk and You. Please help me bring S.T.A.Y. to life. It’s designed to give people a platform to connect with one another without prejudice, labels or filters. Just real stories that can make a difference in someone’s life today. Our mission is to help prevent suicide by providing people a place to connect, share and/or just listen to other’s experiences in real time. We believe that this can be the difference between life and death in moments need. It’s for all ages all ethnicities all cities’ states and more. It’s about connecting to people live. IRL-In real life. It’s about creating a safe space for anyone that needs support or help.
The space will be live and for anyone that has been touched by suicide thinking about suicide has a friend concerned about suicide or even just wants to understand more about what suicide is. Everyone is welcome to STAY.
Suicide Talk and You Inc. has been submitted to Secretary of State for 501(c)3 non-profit approval.