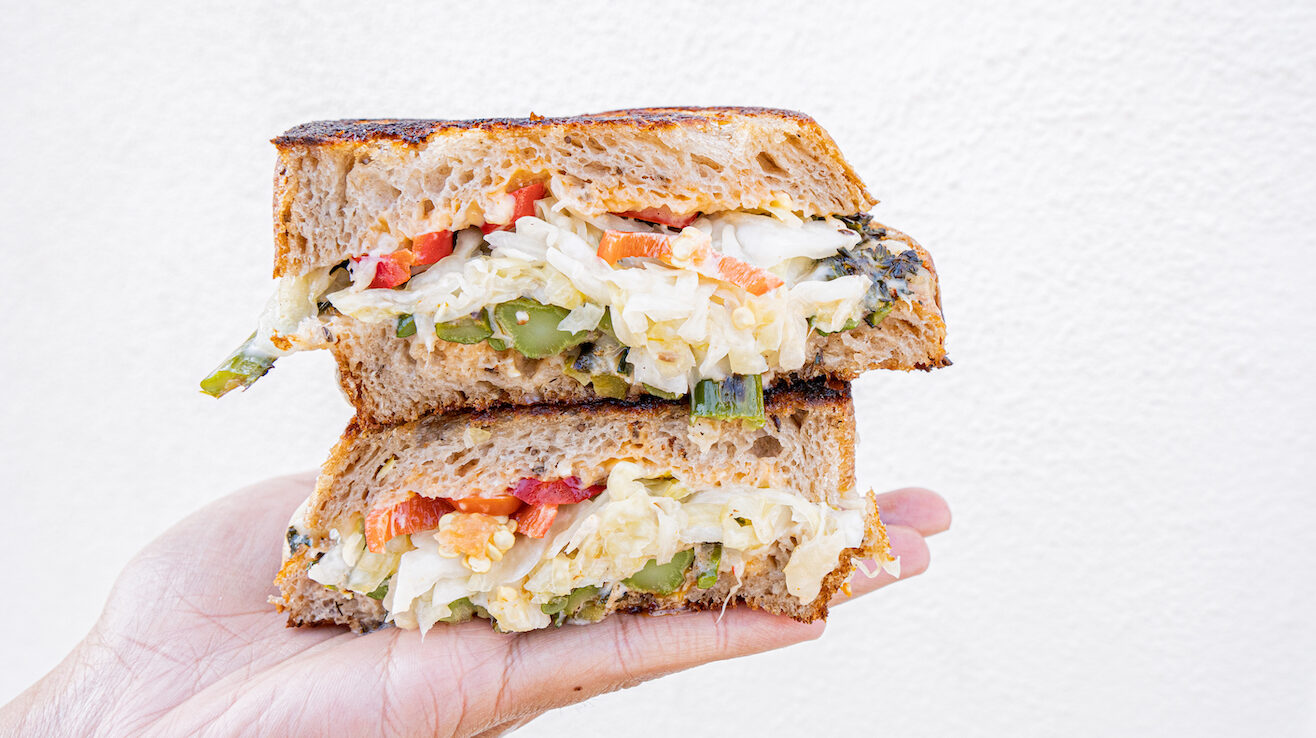 I’ve heard from several of my friends that there was a “dope” sandwich shop that had opened up right on the outskirts of the historical Rose Park neighborhood. After getting so many recommendations, I decided to make the trek over. The place happened to be the Heritage Sandwich Shop which is a modern sandwich outfit situated in a Craftsman bungalow on the southwest corner of 7th and St. Louis. Parking was difficult during high noon (it’s a Long Beach thing; if you know, you know). I persevered and luckily found a spot nearby. I walked up and realized that the building used to be the location of two businesses—the short-lived Midnight Grind Café and the Rose Nail Salon. I distinctly remember it totally overgrown with weeds and having an unattractive façade that was plastered with signage. I was glad to see that it had been thoughtfully renovated to match its origin as a house built in the early 1920s. I walked up and what was once the café is now occupied by the new shop. The salon remains vacant, though I’ll touch on that later. I entered and was cordially greeted at the counter by Lauren, one of the co-owners of the shop. I ordered several items and proceeded to wait outside where they had tables set up for outdoor dining.

On my first visit, I got the smoked prime brisket sandwich, deviled eggs, and some chips. I took a bite out of the sandwich and it was amazing! It was comprised of smoked brisket, coleslaw, pickles, and garlic aioli between slices of country loaf. The brisket, sourced from Santa Carota carrot-fed beef, was tender, unctuous, and moist. The richness of the meat was further enhanced by the brightness of the slaw and pickles lending to a deliciously balanced experience.

The deviled eggs were no slackers either. The creamy yolk filling had a slight zing and was adorned with a piece of crispy chicken skin that added a satisfying crunch to the affair. I made short work of them and was so impressed by the quality of the food that I had to talk to them and see what they were all about. Here’s what I found out.

Heritage opened their doors in early August of this year. It’s owned by the brother and sister team of Phillip and Lauren Pretty, the former was a chef-owner of Retro Row’s Restauration while the latter is a talented bartender who worked “under Sam Ross” at Hinoki & the Bird. They’re both Long Beach locals who’ve lived here most of their lives and reside in a house that’s walking distance from the shop. “Long Beach means everything to me,” said Phillip, “it becomes a part of you…it’s a city built on business owners. Locals owning businesses they can walk to is Long Beach at its core.” They were both exuberant and passionate when talking about the city and have made an effort to support locals by getting their tea, coffee, bread, aprons, design work, and even construction from all Long Beach vendors. This “supporting local” philosophy also extended to the food of which they source from the Santa Monica Farmer’s Market.

They would visit the Farmer’s Market weekly to procure seasonal ingredients straight from the farmers which allows them to ensure quality and sustainability while also having the creative outlet to tailor their menu based on what’s available at the time. This season they had Concord grapes which Lauren had been using to develop a natural grape soda (she shared a sample with me and it was delightfully grape-y) as well as apples which their in-house pastry cook, Tessa (whose resume includes the Ritz-Carlton Laguna Niguel), has been using to make apple galettes.

As for the sandwiches themselves, Phillip talked about how he wanted to adapt fine dining concepts into sandwiches, taking anything you’d normally see plated and putting those between two slices of complementary bread. Having to come up with seasonal sandwiches based on whatever the farmers bring to the market mirrors the execution of dishes often found in haute cuisine. This results in wholly unique items such as their char grill broccolini on rye which is like a Rueben with the broccolini taking the place of what would typically be corned beef. Yes, it’s delicious and a must-try.

The story does not end at the sandwiches. The house itself is a story having been built in 1922 by a female architect. It started out as a house, then was converted into a duplex, which then became commercial spaces for tenants ranging from palm readers to taquerias over the years. What’s notable is that the most of the surrounding residences were historically designated with the exception of this property. Phillip believes it’s because the house was built by a woman during that era so it was intentionally excluded. Whatever the case, it all worked out as they would never have been able to set up shop with historical oversight.

As for the vacant nail salon next door? The Prettys hope to some day convert the space into the Heritage Tasting Room which would involve a prix fixe 5–7–9 course menu revolving around a wood fire grill as well as a cocktail bar. They’re hoping the entire Heritage house continues to grow, eventually adding a Heritage Event Space as well to the backyard. In the meantime, be sure to give them some Long Beach love and add your piece to the story. 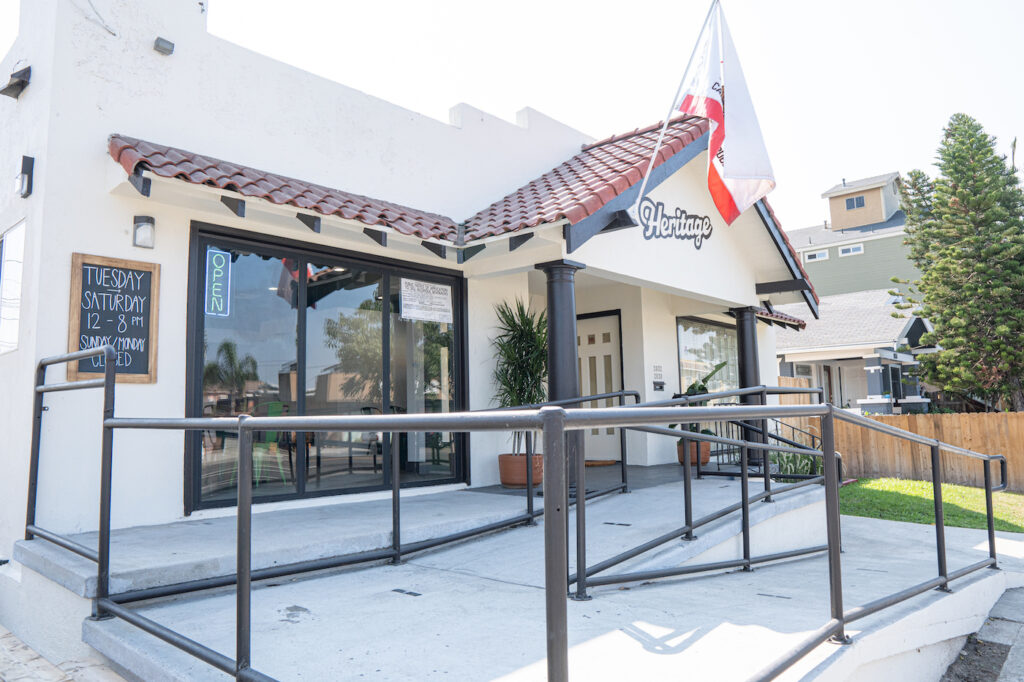 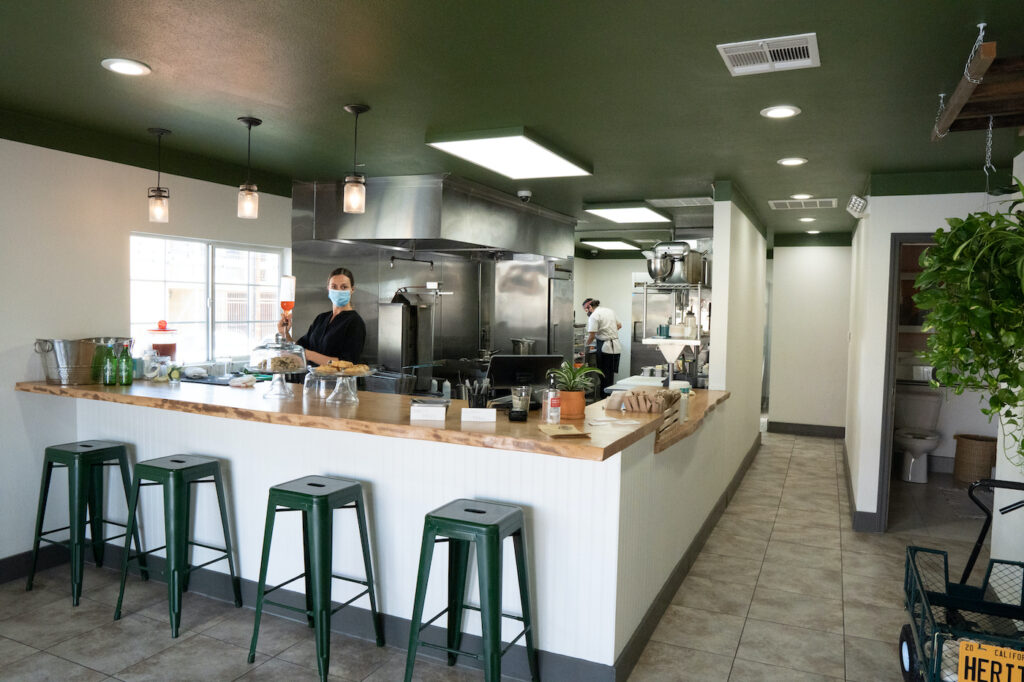