Long Beach Airport’s Festival of Flight is Back!

When it comes to Dia de Muertos, the first thing that people usually think of are the sugar skulls and parades that occur. However, the most important aspect of the holiday is without a doubt the ofrenda. Dia de Muertos is a day which, according to tradition, the spirits of the dead come to the living world in a family reunion of sorts.

The ofrenda is where the celebration of the living and the dead aspect of the holiday come into play. It is a homemade altar composed of items that are all placed in dedication to a deceased friend or family member. None of these items are placed carelessly, as each one holds significance either towards honoring the deceased or tradition. These items vary depending on the likes of the person or persons the ofrenda is dedicated to, but there are commonalities.

Ofrendas are built using tiers, each built with a different way of honoring the dead. The first tier at the bottom of the altar holds the cempazuchitl flowers, which literally translates to twenty petal flowers, along with the candles. These bright orange colored flowers, along with the candles, serve to guide the spirits to the ofrenda. Essentially serving as a light source for the spirits as they traverse through the completely dark underworld, according to Aztec tradition. In some regions of Mexico, they also include basins of water on the floor. This aspect has shifted over the years from the Aztec beliefs to Catholicism. The Aztec belief is the spirits would drink to quench their thirst from their long journey, and the Catholic belief is the spirit can cleanse themselves with the holy water presented. These candles and flowers lead to a pyramid like table, draped with bright tablecloths adorned with papeles and copal incense burning on it, something which is used to further guide the spirits back home.

The middle tier of the ofrenda is where the actual “offering” comes into play as it includes the things that the spirit enjoyed in life, commonly represented by foods. Families will usually put the deceased’s favorite food or alcohol on the ofrenda, or perhaps a favorite toy instead if the spirit is a child. This tradition of treating the spirits with food seems to stem from the Aztec belief that souls require nourishment, even though they are dead. Modern day practitioners however, choose to acknowledge more the symbolic connection between the food and the spirit.

Also included on this tier of the ofrenda are the calaveras, or the sugar skulls that many people think of. These skulls, like their English name implies, are simple little skulls made from glued granulated sugar and decorated. Usually, they also adorn the name of the deceased on the forehead of the skull. This, along with many of the skeleton elements of the holiday, seem to stem from its relation to the Aztec god Mictecacihuatl. Mictecacihuatl, or the Lady of Death, ruled the land of the Underworld, or Mictlan, alongside her husband Miclantecuhtl. Mictecacihuatl reigned over the ninth level of Mictlan, which is the first level that a spirit must enter as they traverse the higher echelons.

The Aztecs believed that the Lady of Death was ever present at festivals of the dead and in fact looked over the bones of the dead. It was the goddess of death’s job to take these bones and bring them back to the land of the living, to be restored later by the gods. Because of this important aspect of death and resurrection, the entire ninth month was dedicated to her and her husband.

The final tier of the ofrenda is the top, and therefore the most important tier out of the pyramid like structure. Atop the structure for the ofrenda lies the photos of the deceased family member in remembrance. This person, or persons, is the sole reason for the ofrenda at all. For a moment, this spirit is remembered and celebrated almost as if it was a reunion. In addition to the photos, many Catholic relics are often used in conjunction. Relics like the crucifix, or the Virgin Guadalupe.

Though every item of the ofrenda is deliberate or rooted in Aztec culture to an extent, modern day ofrendas are not usually built with each of these aspects in mind. They don’t need to, as the essence of the holiday remains as clear as it has ever been. This is a day where families and friends can once more be close to their lost loved ones, by celebrating and presenting the things they enjoyed in life.

LB Living would like to invite you to engage in our “Iconos y Ancestros: A Community Ofrenda” at the upcoming Dia de los Muertos Festival. You can participate by bringing a printed photo of your loved ones to display in the ofrenda. Please make sure that the photo is no larger than 4×6 (size of a standard photo). The ofrenda is presented in association with Adelitas Revenge. 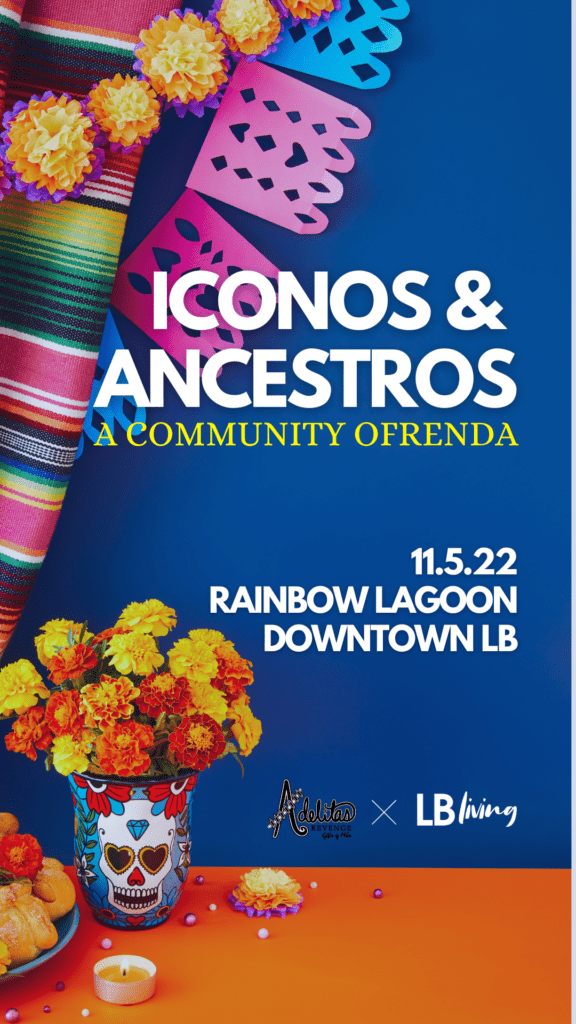 Christian Lopez is a reporter and writer, having published numerous stories with the Daily Forty-Niner. Chris specializes in entertainment news and photography, having written and taken photos for numerous special events. He is majoring in Journalism at Long Beach State to help strengthen his abilities. In his free time, Christian likes to walk around taking photos on the street, play video games, and write short stories.