Flaky and buttery crust. Chunks of moist chicken paired with peas and carrots. And a rich-yet-gentle chicken gravy that envelops your palate in a warm hug. It’s the chicken pot pie, one of the ultimate comfort foods that evokes nostalgia with every spoonful. As we settle into cooler weather, and our temperature drops below 70 degrees (which is cold for a native Long Beachian), we all seek food that warms our soul and makes counting calories a distant memory. Here is a thorough, but not comprehensive, list of some of my (LBFoodComa) favorite chicken pot pie experiences in the city.

Starting off strong, this is my definitive best chicken pot pie, and perhaps my best savory pie, in the city. It’s a pie with discernible cubes of chicken, slices of carrots, and vibrant peas dancing in a luscious roux. What sets it apart from the rest of the pies is the crust. It has a shortbread crust which is crumbly, buttery, and is the embodiment of comfort food. It’s heavy. But it’s so moreish that you find yourself with an empty bowl and in a food comatose state with little effort. Pro-tip, balance this pie with a tang-forward hot sauce such as Tabasco and you’ve got yourself a next level meal. 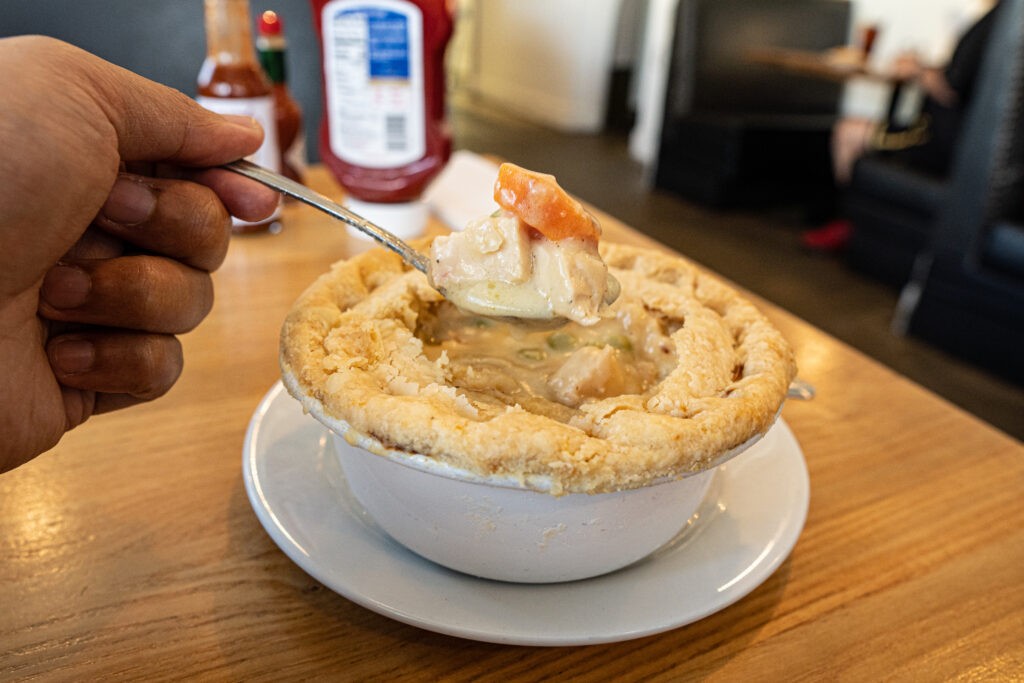 This self-described “unauthentic” Indian restaurant brings a wild twist to the pie game by filling the bowl with butter chicken and topping it with puff pastry. Sure, you may consider it to be a gimmicky vessel for this Indian curry classic, however, I don’t care. There’s a crust, there’s chicken, and there’s gravy. It’s a pot pie. It’s served with turmeric basmati rice on the side which leads to a dining experience that’s creamy, savory, and aromatic. 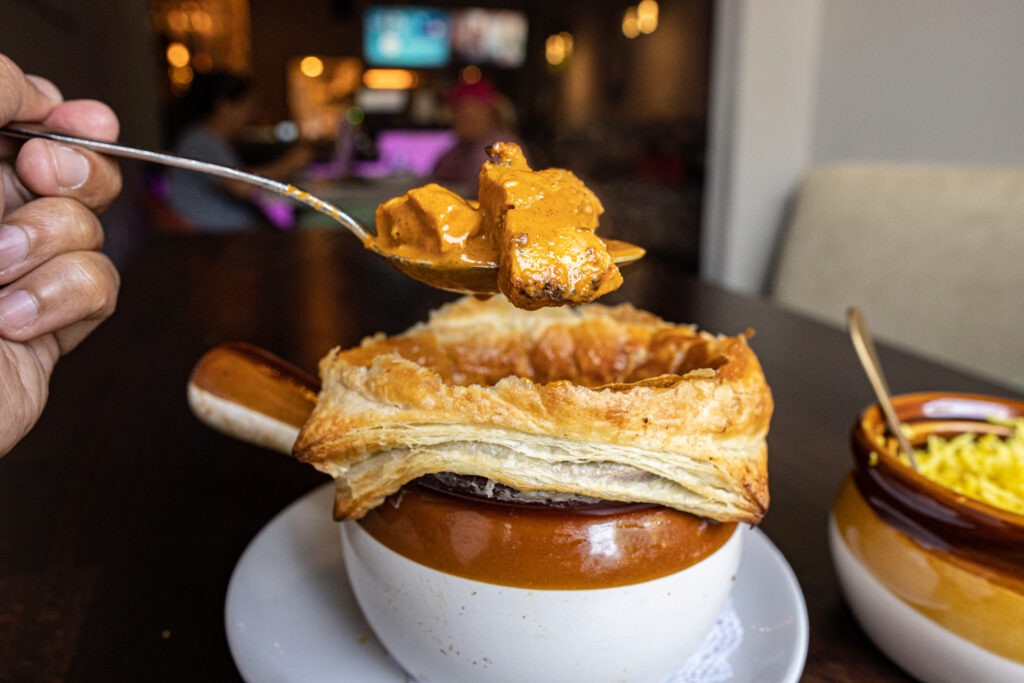 The Eldo is an American steakhouse with heavy South African influence. South Africans found a way to make the pot pie eating ordeal into a situation where you don’t incinerate the interior of your mouth with lava-like gravy. Instead, the gravy is presented in a separate bowl, requiring you to cut off the top of the pie, pour the gravy over it, replace the lid, and consume. 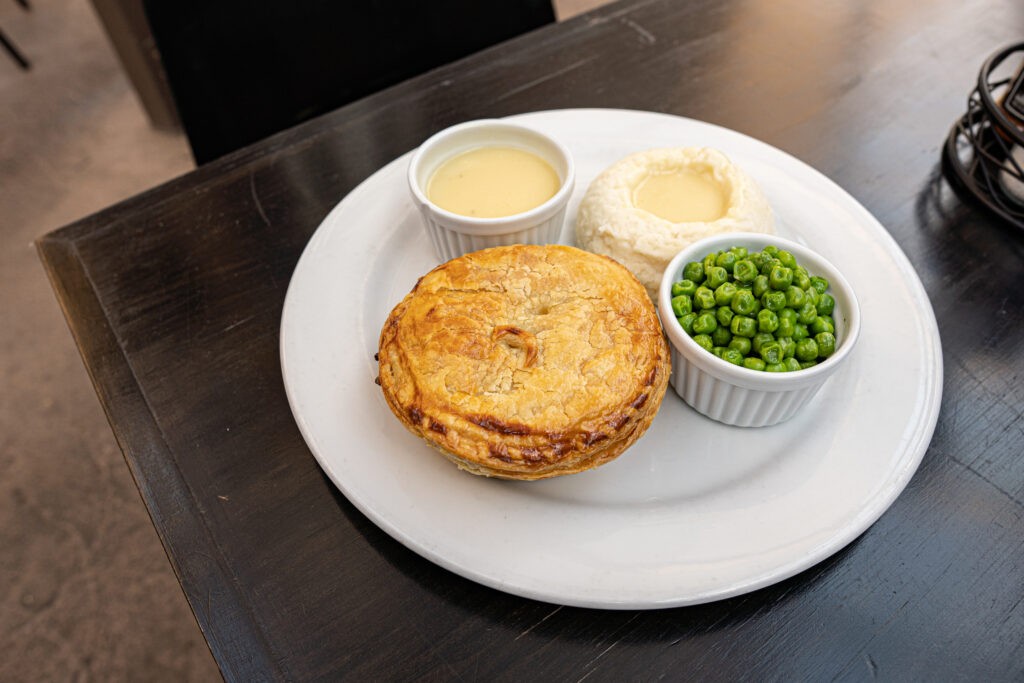 This Irish Pub is located in the Naples area of Long Beach and has a very unique item. This is probably the most edge-case pie on the list, as it’s closer to a Shepherd’s Pie. It’s comprised of thickened chicken noodle soup that’s topped with mashed potatoes and baked in the oven. As the old adage says, don’t knock it ‘til you try it. It’s a real treat. 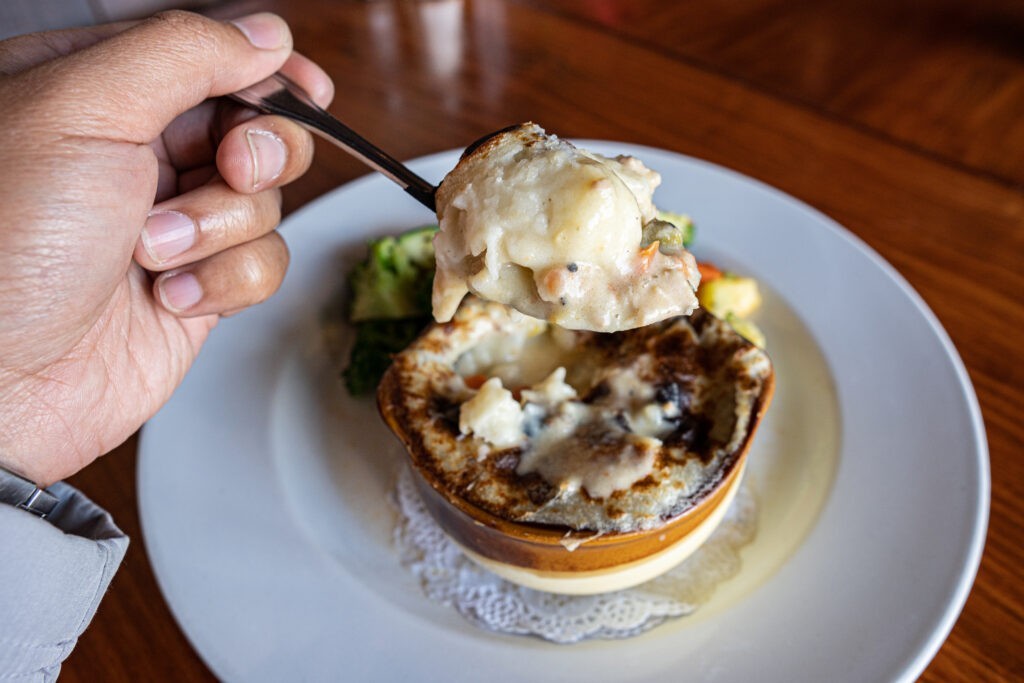 This restaurant’s mission is to create an environment and menu that’s safe for individuals with the most common allergies without sacrificing flavor. To create a pot pie that has no dairy seems like it would be a tall order, however, Noble Bird manages to do just that. They serve a deconstructed pot pie that’s comprised of potatoes, carrots, green beans, mushrooms, and their signature rotisserie chicken sitting atop a dairy-free gravy and topped with a delicate crust. It’s a flavor and texture bomb that’s worth trying again and again. 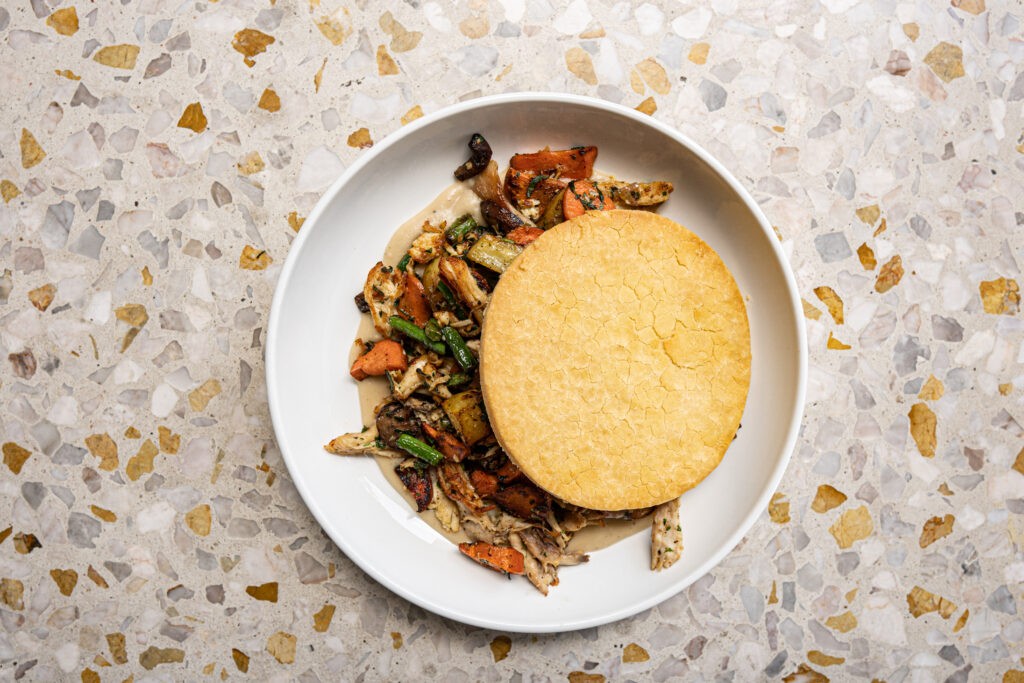 This place has one of my favorite cocktail programs in the city, however, their appetizer program is something that’s also impressive. In particular, their chicken pot pie bites. They’re closer to a hand pie or empanada situation as the trio of chicken, carrot, and peas are sealed into a hand-held pastry and set to play in a shallow pool of gravy. Rip, dip, and don’t trip. These are a must-try for any chicken pot pie aficionado. 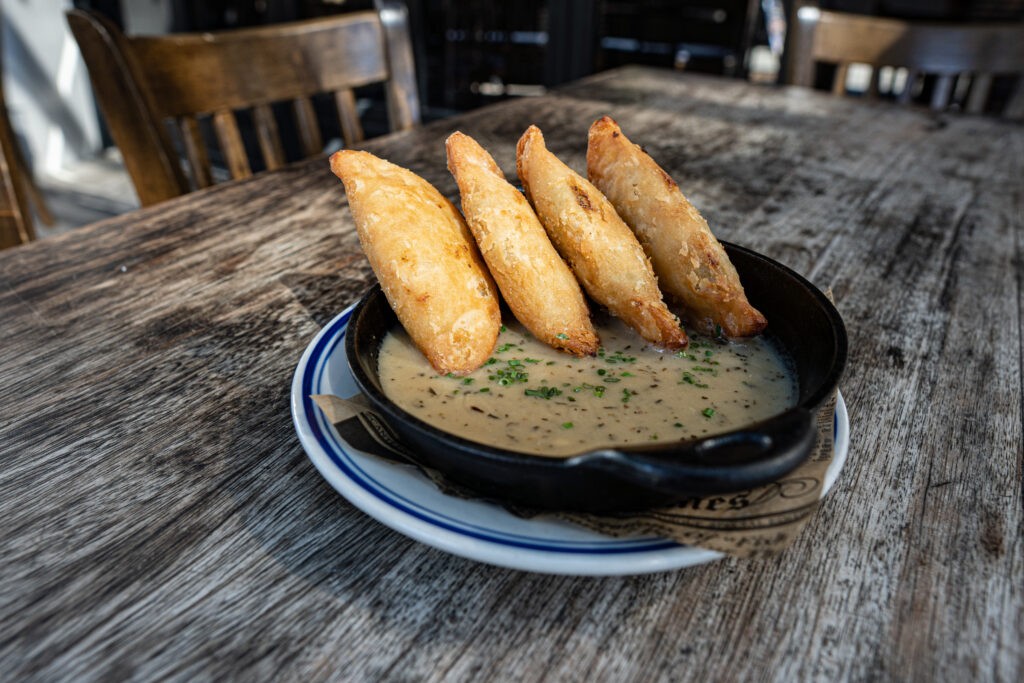 Located adjacent to the Long Beach Airport, this little café gets very little love. However, the pot pie here is genuinely tasty. The chicken is marinated in herbs, while the roux has the distinct fragrance of nutmeg on the back of the palate. 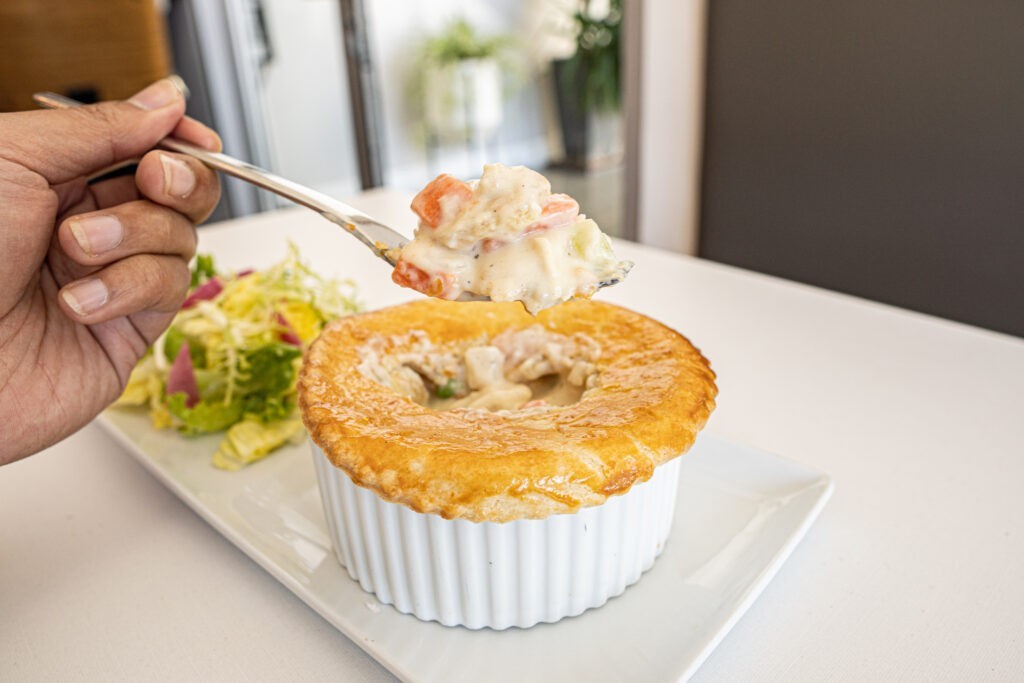 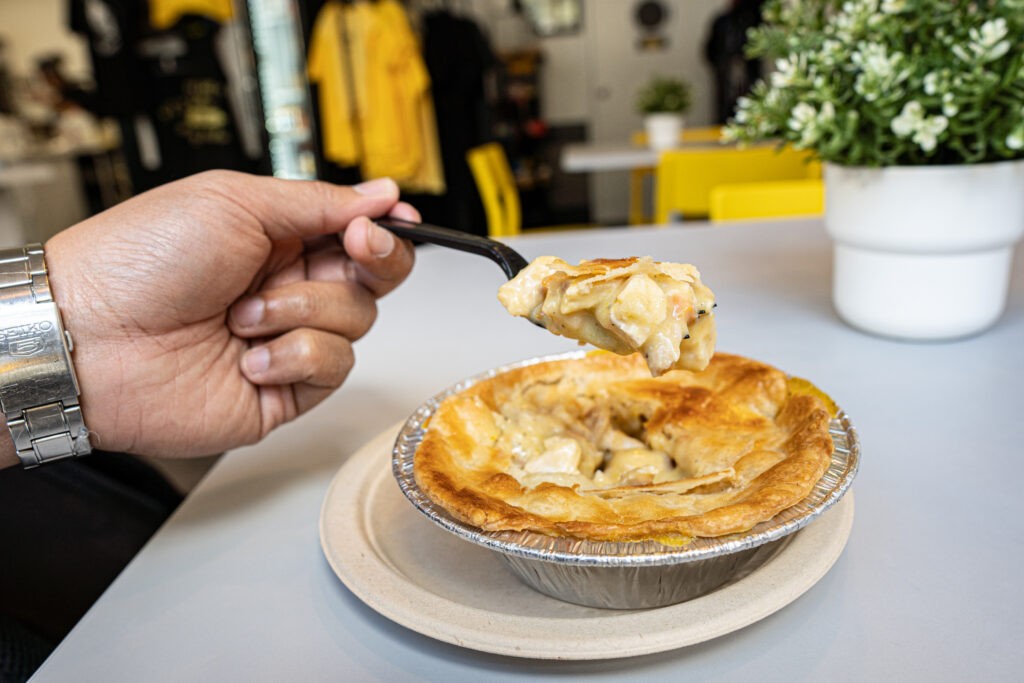 This poofy pie also has chicken, carrots, and celery. What makes it different from the quintessential pot pie is the use of cream as a base. Most pies use either flour to create a roux or corn starch to thicken. It’s much more cream-forward rather than chicken-forward in its taste, which I quite enjoy, especially with an Old Fashioned in hand. 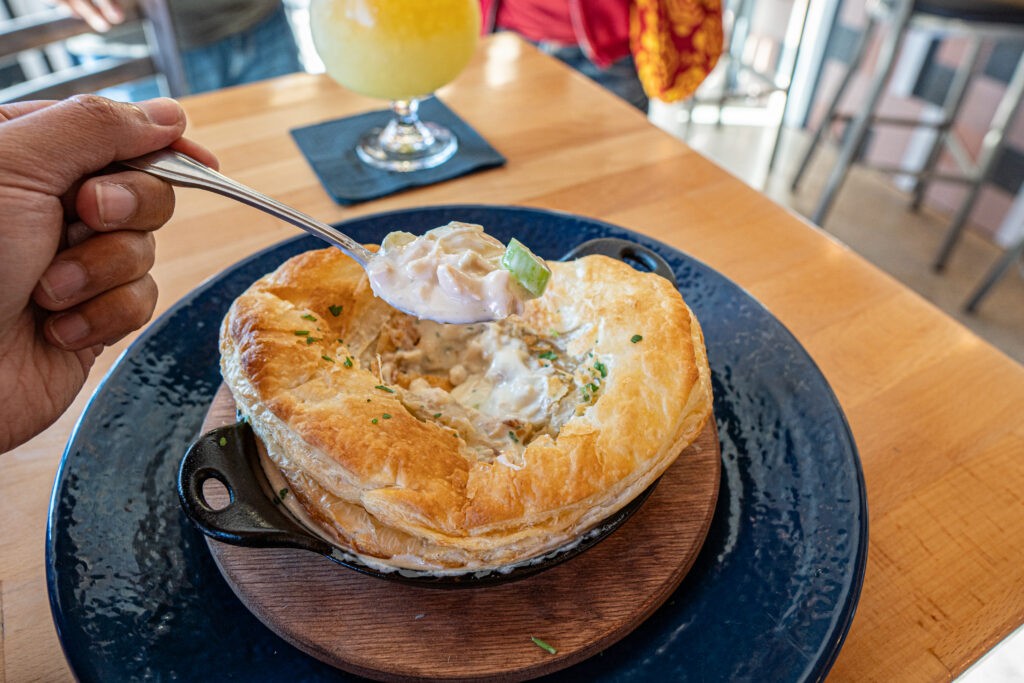 This Bixby Knolls restaurant serves the most extravagant variant of chicken pot pie on this list. It’s comprised of pearl onion, peas, baby Yukon potatoes, and a blend of dark and light meat chicken that’s Hickory grilled and braised in a wine stock mirepoix, all of which is submersed in a roux-less reduction. Meanwhile, the crust is brushed in brown butter and a black truffle tapenade. Is it excessive? No, it’s delicious. The interior of the pie is intensely rich while the crust is perfumed with the earthy essence of truffle. 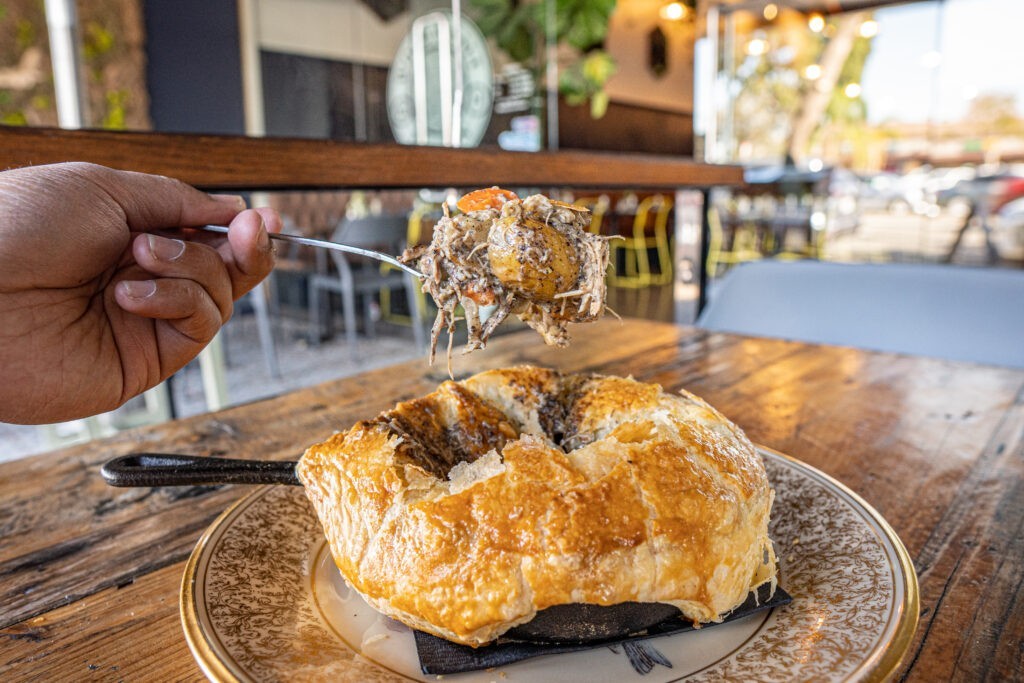 This Bluff Park restaurant is entirely vegan, widely known for their house-made vegan meats. From chick’n and waffles to Monte Cristo’s, this place has managed to make a plant-based menu that feeds the soul and delivers on flavor. One of their new seasonal items is a riff on the classic chicken pot pie formula. It’s comprised of a chick’n pot pie chowder that’s dotted with butter-glazed baby biscuits. Knowing how good their menus have been, I was not skeptical in the least so I dove right in. It was a velvety gravy experience, paired with a crumbly biscuit “crust”. The chick’n itself was very tender, I didn’t find myself missing meat at all. It was a wholesome meal that I’d go back for again and again. 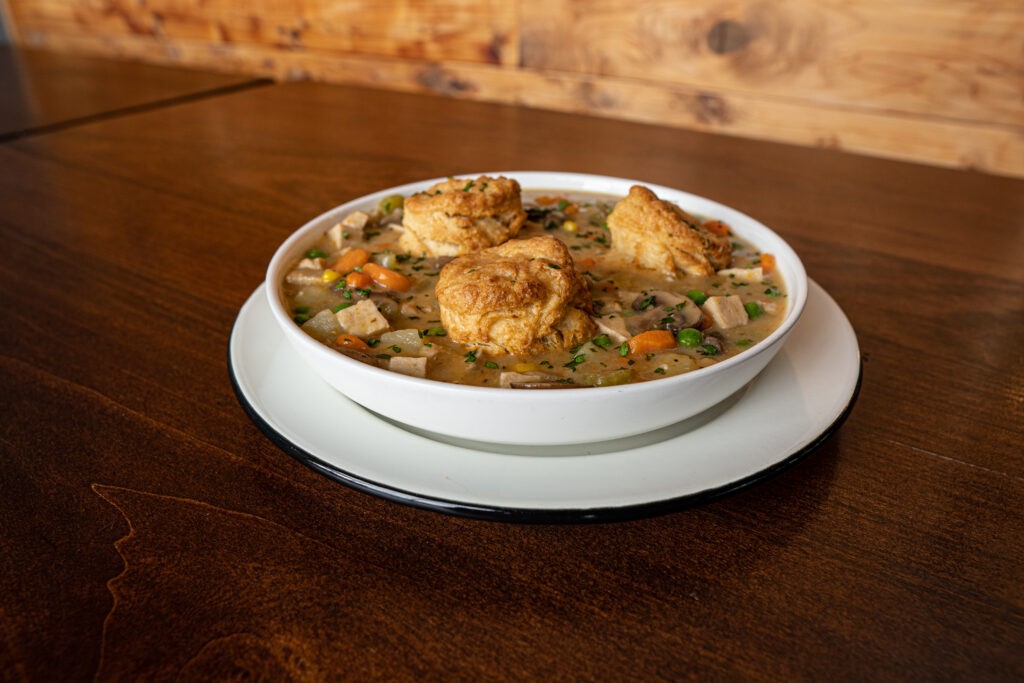 All photos by James Tir.