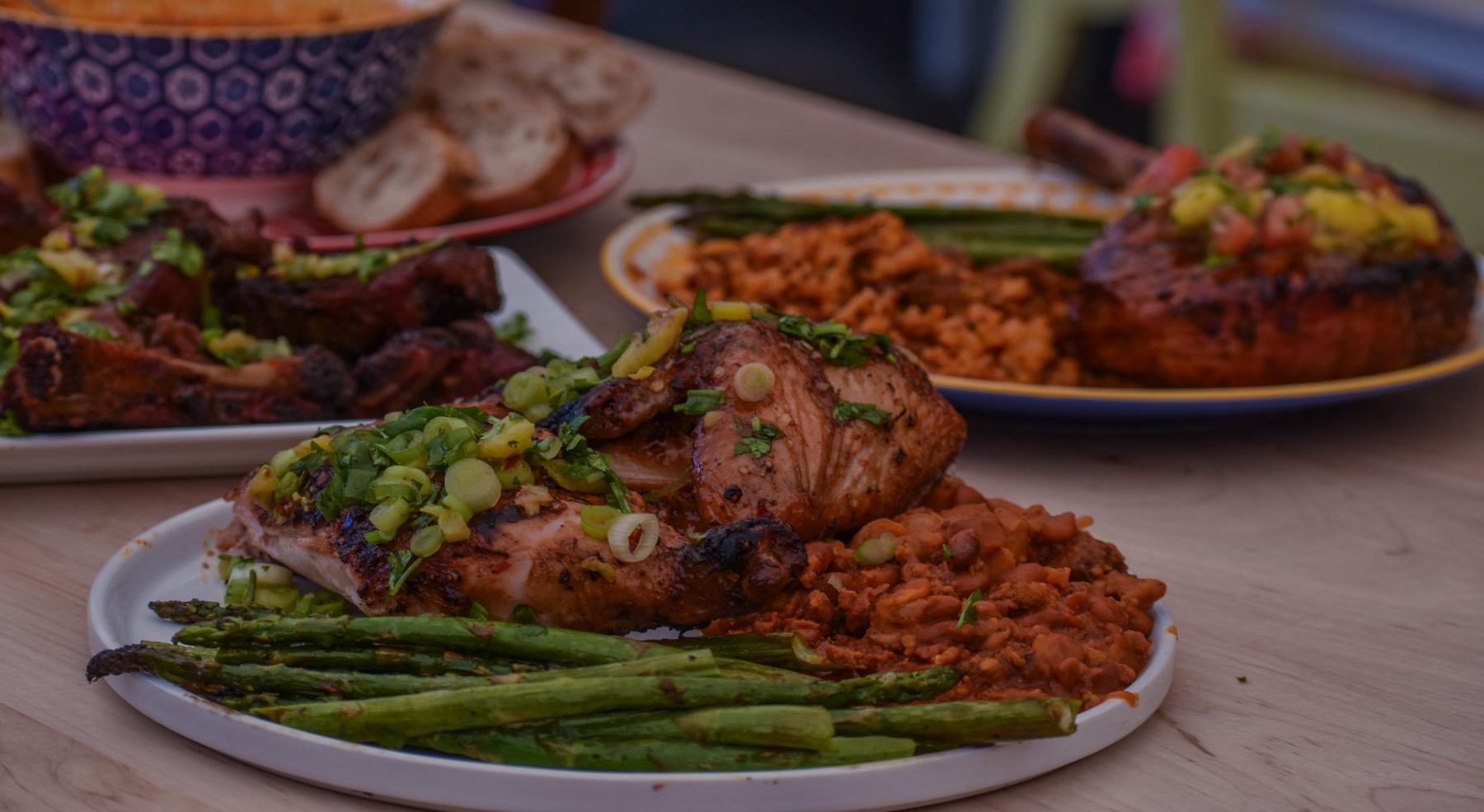 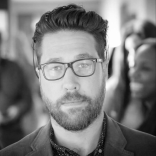 The father-and-son team behind one of Long Beach’s most anticipated brick-and-mortars proudly proclaim their food as “Long Beach barbecue,” where stick ribs marinated in fish sauce and pork chops topped with pineapple and cilantro are run of the mill.

Sitting at an eighteen-foot-long wooden table on their newly minted patio of their newly minted brick-and-mortar, father-and-son team David and Dennis Robicheau happily argue about a particular part of their inaugural menu at Shady Grove Foods: The depth of the roux that is their base for their green curry gumbo.

“Dennis wants it dark but with that curry in there, I think we should go lighter,” David, the patriarch says. “These are the types of spats we share day-to-day but in the end, I am just happy we’re bringing Long Beach barbecue to, well, Long Beach. And, of course, I trust Dennis. That boy served me his first steak cooked over coals in the sixth grade and it was medium rare perfection.”

Announcing their takeover of the space next door to Gusto Bread on 4th Street seven months ago, the Shady Grove crew rightfully share a pride in finally seeing the sweat of their labor turn into fruit: After eight years of doing popups, parking lot servings, and sun-soaked festivals stretched across seemingly endless amounts of asphalt, the barbecue family has finally found what it hopes to be its forever home.
“We love Texan barbecue but we’re not Texas. Sometimes, I wish Long Beach understood what it really has: Its own unique ecosystem with its own distinct characteristics. What we create is for and through Long Beach.”
“I really want this to be a thing—Long Beach barbecue,” David emphasized. “I want people to come here and see what we’re doing with what we have here—which is really a great collection of people and cultures.”
The love and respect the Robicheaus have for Long Beach’s rich cultural landscape has long been reflected in their food: Their love of the city’s Thai community is a part of that very gumbo. Their use of fish sauce—happily and flavorfully throughout nearly the entirety of the menu in one capacity or another—is a nod to their ties to their Cambodian friends.

“I used to tell my wife: ‘I think we’re the only white family who genuinely becomes frustrated at continually running out of fish sauce,'” David joked, laughing heartily as he shares his own Cajun roots—from his family in Louisiana—with his more newly set roots with a family here in Long Beach several decades ago.

For the Robicheaus, the patriarch’s own heritage—Cajun and Southern American—is one that has been a continuous presence in their family traditions: David’s backyard dinners, where pots of gumbo and plates of Cajun meatloaf were the norm and grew to be a thing of legend in the city, especially as he began incorporating more of his own experience, as well as that of his son Dennis, into his food.

It’s gumbo and jambalaya with smoked pork shoulders and some of the city’s best bacon. It’s tri-tip and eggs. It’s fish sauce-marinated stick ribs. It’s definitively what its name say it is: Long Beach barbecue.

An incorporation, mind you, that is rather apropos: Cajun culture and cuisine is a conglomerate of French, African, Mexican, Native, Black American, and a variety of other cultures; it is something that is serendipitously reflected here in Long Beach, where Black American, Cambodian, Thai, Mexican, Salvadorian, Italian, and a seemingly endless amounts of other cultures blend.

For Dennis, growing up meant interacting with these cultures on a nearly daily basis, with his best friend and local artist Jason Keam—whose ubiquitous style found throughout the city is harnessed in a small pig mural inside Shady Grove—leading the way.

“Cambodian gatherings were honestly just a part of me growing up—and a lot of the flavors I incorporate into the food I cook comes from those interactions,” Dennis said. “And I remember how differently my Cambodian friends approached things. Like Cambodian barbecue—let’s say pork ribs: They cut each rib off and sear every edge over the fire so that the entire rib is crispy on the outside, 360 degrees. People in Texas would basically call that heresy,” he said, laughing.

But in Long Beach, it creates a dish is, well, distinctly Long Beach: meaty pork ribs are marinated in a fish sauce concoction before being smoked and charred around all sides, finishing off with a pineapple, cilantro, and green onion topping that melds the flavors of Cambodian ribs with Southern smokiness. The result is a beautiful representation of a menu that oozes odes to the cultures who have long called Long Beach home.

“We love Texan barbecue but we’re not Texas,” David said. “Sometimes, I wish Long Beach understood what it really has: Its own unique ecosystem with its own distinct characteristics. What we create is for and through Long Beach.”

For Dennis and David, there is a sense of absurdity behind the idea that food which is so particular to given geographical space—complete with that space’s natural resources, climates, and earth—should be replicated in any place outside that very place. Texas barbecue is Texas barbecue for a reason, just as a bottle of vermentino is distinct to the place it was created in Italy.
See Also
Community

Long Beach has its own culinary riches that bounce between being located in Southern California, with some of the best access in the world to high quality produce and seafood, and its particularly unique blend of cultures—and that is what gives Long Beach barbecue its distinctness.

You get a butter lettuce salad—with a fish sauce dressing that is as addictive as it is marinade-worthy—topped with a chunk of salmon whose smokiness from being held over burning wood comes through to cut through that very fish sauce.

You have a tomahawk pork chop so masterfully cooked that you will not want to ask how they brine it because they do not: Scoring Duroc pork from Beeler Farms, this massive chunk of pig is a reminder of what happy pigs taste like when they’re not forced to live a factory farming life. Seasoned and topped with nothing more than a mango-habanero salsa, it is a reminder that we often forget how our food should taste.

You have what David calls their play on chips and salsa: A bowl of deeply rich, shrimp-centric Creole red sauce, based around the Holy Trinity of peppers, onion, and celery, with slices of Gusto bread for dipping.

Speaking of Gusto, you have a BLT unlike any other: For those who haven’t experienced Shady Grove’s bacon—arguably the best in the city—it is honestly rough to describe the magic: A slab of cured pork belly is cut into half-inch slices, smoked and then charred with bourbon, resulting in a creation that harkens to David’s own youth—”We never had pre-sliced bacon; we always had to buy a slab and cut our own,” he said—and honors one of the city’s best bakeries.

You have a chicken—so miraculously moist that Dennis says he constantly gets patrons double-checking that the poultry is thoroughly cooked and, “Well, we don’t serve chicken sushi,” he said, laughing—that uses the same marinade and topping as the sticky ribs but comes out tasting altogether different.

Even more, what you have is a Long Beach family that has been slingin’ plates of smoked meats, shrimp and grits, jambalaya—of which they have a solid vegan version—and more for nearly a decade before having enough to step inside a place they can call their own.

It’s a place to not just be a proud Long Beach resident, reveling in the success of a Long Beach family, but a place where you can be the first of what will surely be a thing come soon enough: Long Beach barbecue.

Shady Grove Foods is located at 2708 E. 4th St. and will have a soft opening on Friday.