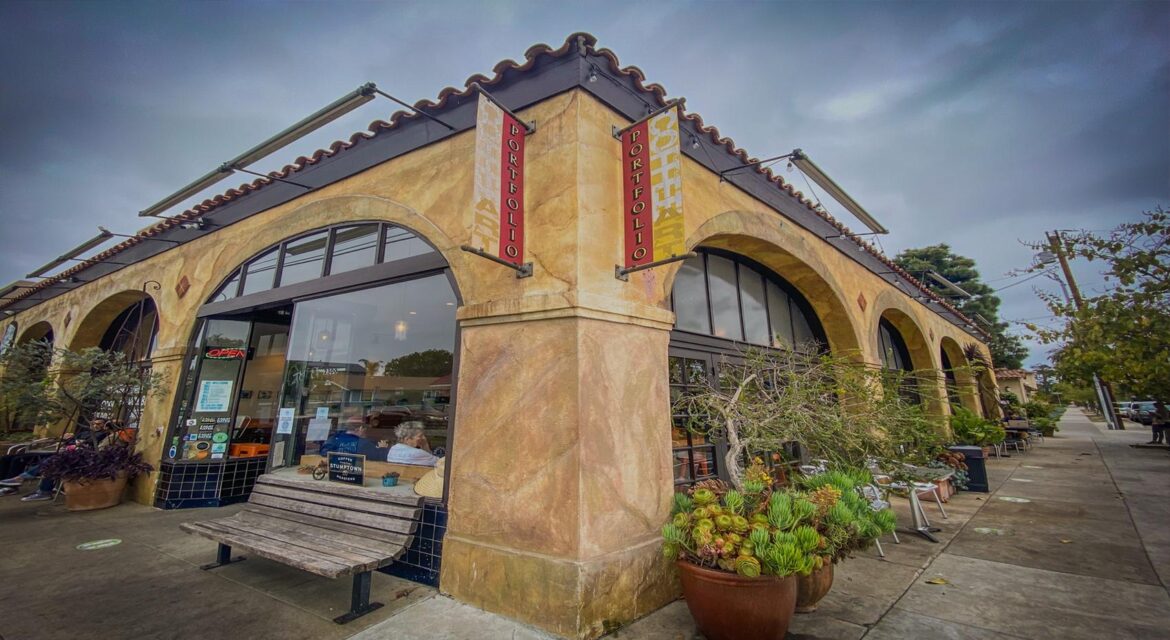 Our space—the ones we are connected to, the ones we assign importance to—is the largest part of this story.

And you know them by heart because they have become attached to you in ways that are much different than a home.

For many humans, 32 years is a decent chunk to have been directly connected with anything, let alone a space that has overtaken your life’s direction.

For Portfolio Coffeehouse owner Kerstin Kansteiner, that time has come to wave auf Wiedersehen to a space that has not only defined her professional career but also connected her with a new home when it opened and, as time passed by, create a community that has wandered through its doors for thirty-plus years—and the goodbye is two-fold: She is not only moving Portfolio, the coffeeshop that has been an anchor for over three decades on Retro Row, she is also moving her bistro, Berlin, away from its downtown location.

Here’s the thing: She’s moving them into the same space just a bit down the street from the current Portfolio, where Portfolio would operate in the morning and early afternoon before transitioning into dinner service from Berlin. It’s a bold concept attached to big food news—two things Kerstin has rarely shied from.

So it would be appropriate to start from the beginning. 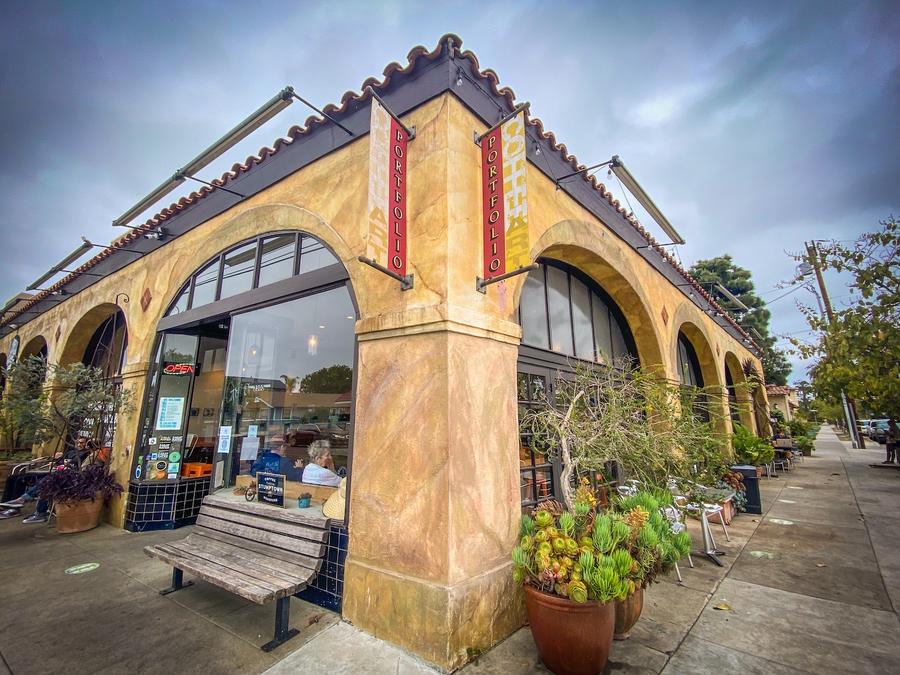 Portfolio Coffeehouse first opened in 1990 at the southeast corner of Junipero Avenue and 4th Street. Photo by Brian Addison.

In 1990, the stretch of 4th Street between Junipero and Cherry was not even a flicker of what it is today. It was, in the words of Kerstin and many business owners, “rough.”

The Art Theatre, long before Kerstin and her husband Jan Van Dijs restored the cinema to its art deco glory, sat dilapidated. Businesses would come in and out. Retro Row—the stretch of vintage shops, restaurants, and salons anchored on 4th Street as we know it—had not come into fruition.

But for Kerstin, having been born and raised in Germany, what she saw at the southeast corner of Junipero Avenue and 4th Street was a building with huge potential: Giant arched windows flanked its western-facing facade while the space inside would be perfect for her envisioning of a place she would call Portfolio.

“I am truly relieved that both of my businesses survived the pandemic; it is not something I can easily look past and that is why it makes sense to move Berlin and Portfolio into the same space. Look around at coffeeshops: It’s shocking that the nighttime business model for cafes doesn’t exist anymore. Every cafe on the planet is now closing at 4PM.”

For well over two decades after opening in 1990, Portfolio rarely changed besides the beans they offered, its bohemian meets hodge-podge-but-it-works vibes—warm wooden tables and chairs were paired with old but comfy couches—felt like walking into a television comedy set. It was once home to one of the city’s few public computers, when the “Cyber Cafe” was just beginning to catch on long before wifi and cell phones-as-computers existed.

Eventually, there was one major revamp of Portfolio, where its warm colors and cozy vibe was exchanged for what Kerstin said was a “step into the contemporary:” The space was made more accessible for those with disabilities, walls were brightened up, the area for baristas expanded…

If there was one thing to say, however, it was that Portfolio became the coffeehouse every neighborhood needs long before we even knew the need for such spaces. Portfolio built a community, some of its original patrons still setting up shop to shoot the shit and smoke cigarettes on Junipero for hours on end. It was a very American interpretation of a European norm—a mixture of Kerstin’s German sensibility and her patrons’ very local view—and it shifted the perspective of what a coffeehouse could be in Long Beach. 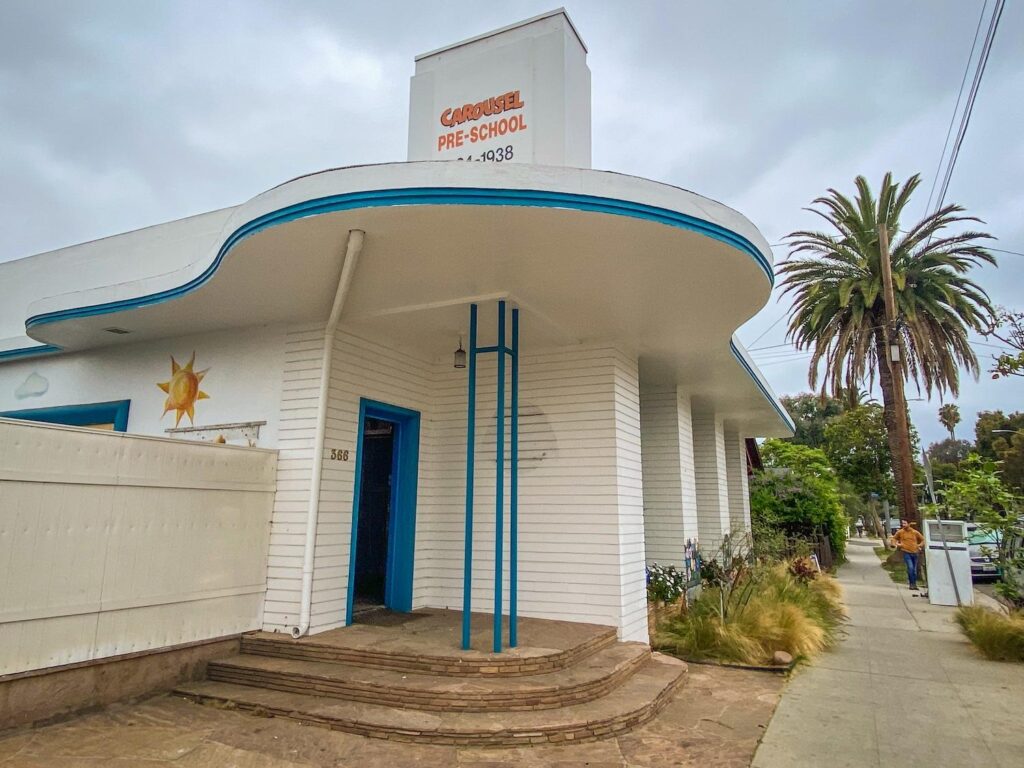 The new space for a Portfolio-meets-Berlin concept on Cherry Avenue. Photo by Brian Addison.

So when her and Rand Foster, the owner of the tiny-but-mighty record space known as Fingerprints in Belmont Shore, opted to simultaneously move one business—Fingerprints—and open another—Berlin—into the same space in DTLB, eyebrows were expectedly raised. It was, in all frankness, radical at the time. While DTLB was certainly attempting to re-center itself as a walkable, accessible neighborhood, businesses had long ignored its potential post-1990s—much like the way people ignored 4th Street post-1980s.

And it wasn’t a conversation about well-to-do entities moving in and sweeping existing businesses out; DTLB was dotted with shuttered businesses and empty storefronts—and for the businesses moving in, finding a patronage proved extremely difficult to grasp. 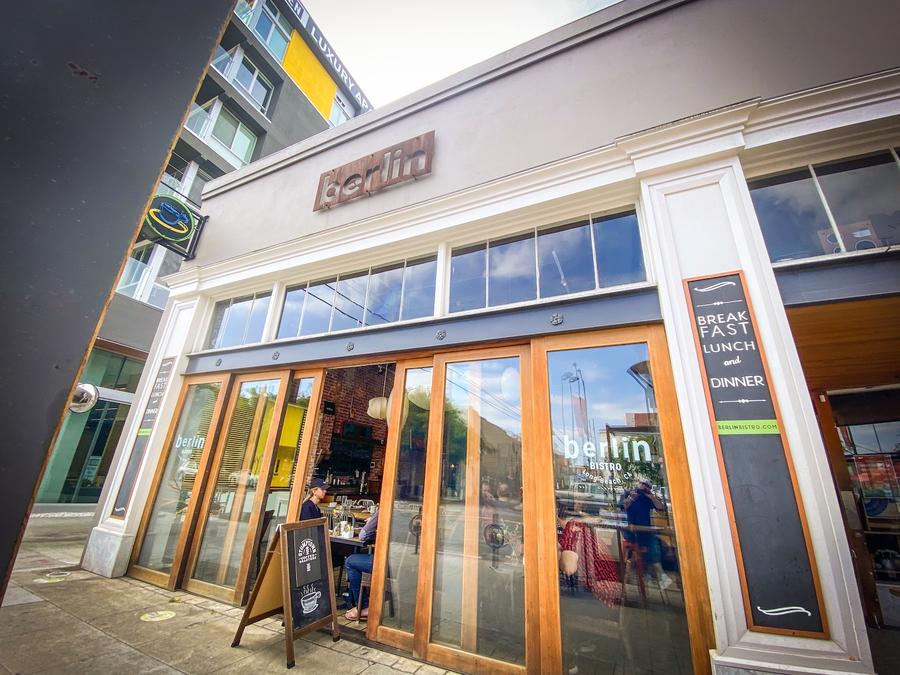 Berlin Bistro opened in 2011 in DTLB in conjunction with its neighbor, Fingerprints, a record store originally located in Belmont Shore. Photo by Brian Addison.

But Kerstin was determined to make one of our city’s most viable resources, our downtown, part of what she had helped achieve on 4th Street with other business owners twenty years prior: In 2011, she opened Berlin while Rand opened Fingerprints and, come a decade later, it is hard for that stretch of 4th between Elm and Linden Avenues to look or feel any different.

“My openness to change comes from the understanding that there is an existing building and Jan can transform that for me. I know I am in a very unique position; not everyone has a Jan Van Dijs in their back pocket. That part is very true: It is scary to maneuver and deal with the city—it is. And I have the confidence that he can transformed spaces because I’ve witnessed him to do it.”

Berlin’s parklet—now overwhelmingly normal-feeling—was actually a massive step forward for how our city viewed public spaces where people are put before cars. Its connection to Fingerprints made it a distinctly unique space where one once witnessed the Foo Fighters coming in to order coffee before performing at the record store.

But now, in the eyes of Kerstin, it’s time to create yet another vibe. 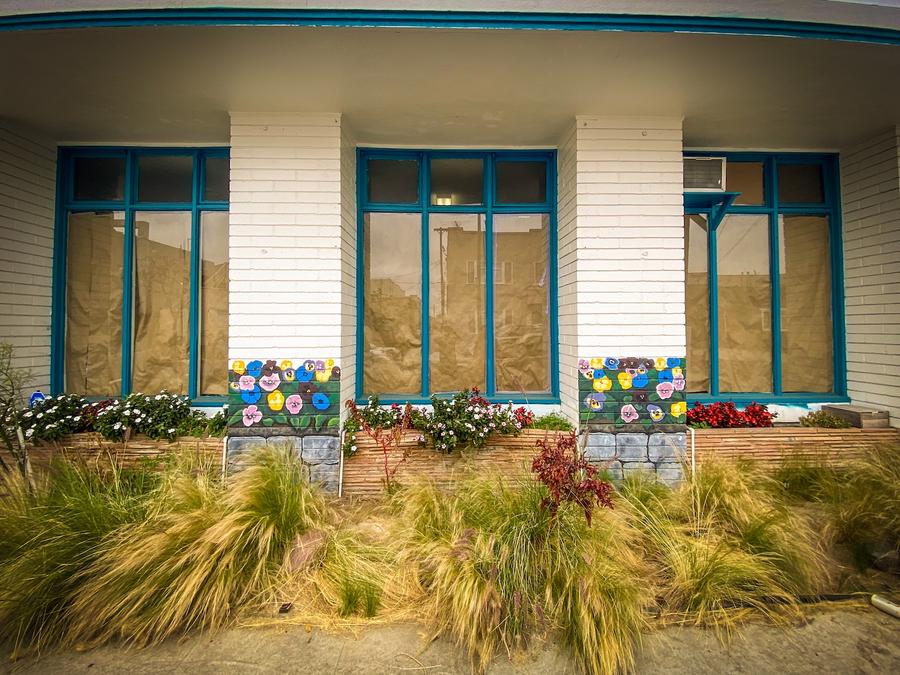 The west-facing facade for a Portfolio-meets-Berlin concept on Cherry Avenue. Photo by Brian Addison.

Situated on Cherry Avenue just south of 4th Street is a building that most locals have continually passed by but likely never noticed: A mid-mod gem that was, for the last several years, a preschool. Come six to eight months from now, instead of children looking out of its floor-to-ceiling windows, coffee sippers and diners will gaze onto the traffic along Cherry while eating some of the city’s best food thanks to Chef Rob Fry.

And like her strolling along 4th Street discovering what is now Portfolio in Alamitos Beach and Berlin in DTLB, Kerstin saw huge potential in a world she says “has massively shifted.

“I am truly relieved that both businesses survived the pandemic; it is not something I can easily look past and that is why it makes sense to move Berlin and Portfolio into the same space. Look around at coffeeshops: It’s shocking that the nighttime business model for cafes doesn’t exist anymore. Everyone on the planet is now closing at 4PM. So after 32 years in the space at 4th and Junipero, we have to move on—and we’re just very lucky we found another space just one block over.”

Given increasing rents—most landlords have been anything but easy on small business owners; Kerstin’s rent at Portfolio was increased no less than twice throughout the pandemic—and the need for additional space, combining the two truly does make logical sense in our post-2020 world.

Yet again introducing a very European concept to Long Beach, the new combined space will be separate by a short siesta where the space will be closed as it shifts from operating as Portfolio in the morning and afternoon to dinner-serving Berlin in the P.M.

Even better, the new space has more outdoor seating than Portfolio and Berlin do combined, an essential aspect of operating any food-driven business nowadays.

Of course, there is a long path ahead: Six to eight months might not feel long but Kerstin and her crew have to not only gut out the space but build out an entirely new kitchen, work with the city on various conditional use permits, and maintain a sense of safety for her employees’ income.

“We’re moving full steam ahead: We’re in the space, we’re renovating,” Kerstin said. “We are moving as fast as we can to make this happen because there are jobs on the lines, real people with real needs and families—and they can’t afford to have a break in their paycheck.”

In other words: Berlin will be Berlin until the new concept officially opens its doors—and like her concern over empty storefronts back on Retro Row in the 1990s, Kerstin is cognizant that she can’t simply walk away from the space she shares with Rand.

Still bouncing back and forth between Berlin and Portfolio—and now, the new space on Cherry—has compounded Kerstin’s openness to change, even with the looming stresses of taking care of existing employees, leaving a small part of the DTLB community with a food space they can continue to visit when shopping at Fingerprints, and awaiting the reception of her new concept.

And that openness is largely thanks to her partner in crime and husband, Jan Van Dijs.

“My openness to change comes from the understanding that there is an existing building and Jan can transform that for me,” Kerstin said. “I know I am in a very unique position; not everyone has a Jan Van Dijs in their back pocket. That part is very true: It is scary to maneuver and deal with the city—it is. And I have the confidence that he can transformed spaces because I’ve witnessed him to do it.”

This is not to say that each transition has been universally hailed: Kerstin notes that not many people immediately took on to Portfolio’s last revamp but it did propel the shop into the space it needed to be: Counters were falling apart, folks using wheelchairs would often send people in to order for them, the floors were dilapidating…

The change needed to come and witnessing Jan take it on not only gives Kerstin the confidence she needs in her new concept but also, a fairly heavy goodbye.